I am back from Moab, UT and had an amazing time! It is so awesome out there. The scenery is gorgeous and the biking is really hardcore. I was pretty impressed. It was not your average mountain biking experience. We were able to manange though, despite having a group with a big variance in experience.

We went on a pretty basic ride the first day, just to get acclimated to the area and the rental bikes. I was a little worried about it being boring at first, but it turned out to be a good choice. Not tough, but good views, and fun. It also had a pretty good uphill that worked my legs a bit.

The second day we went on the classic ride in the Moab area. It was called the Slickrock trail and it was so cool. About 99% of the trail is o these rocks. You are following around a painted dashed line as the route. Some of the guys couldn't hang on this trail and bailed out, but a good group of us rocked it, including Dad! Everyone had to walk the bikes a little bit because there were some really tough parts, but I tried to minimize that as much as possible and I think I did a good job. I was very impressed with the women that I saw out on the trail. Not many women that I know would be riding it, and I thought that was great! 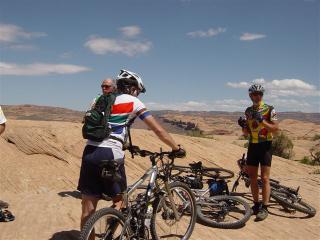 The last day we did a crazy, mostly downhill trail that was a lot of fun. It was really bumpy with rocks but there were some great jumps to be done. A few times I was worried that I was going to bite it, but I did pretty well. The end of the trail was a tough single track with a big cliff that dropped off to the right. A little scary at times. There really wasn't any time when you could lose focus, or down you went. Dad was a bit intimidated by this, and fell once close to the edge, but he kept up very well! 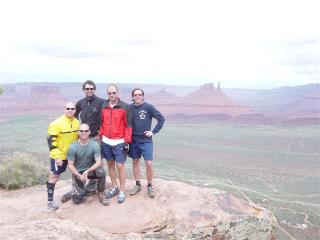 All in all it was a sweet guys weekend and I wish it could have lasted longer, even though my body probably doesn't. The one thing that was annoying was that the Mormons in UT do not allow real beer in the state, so we were drinking 3.2% beer. Its basically water!!
Rambling by Tyler at 10:30 AM