Florida and a new vehicle!

My girlfriend, AD, and I went to Palm Beach for a little vacation to get away from DC in the middle of June. I had been down there for Memorial Day weekend, but decided that it would be fun to go just the 2 of us. However, the first tropical storm of the year decided that it wanted to ruin all chance that we had of just relaxing on the beach. It rained a good portion of the time and the waves were rolling in from the east. This made it too rough to use the kayaks and it also covered the entire beach with tons and tons of seaweed! We actually only went down to the sand twice... We did get to sit by the pool for a little while and we were able to swim. Here is a picture of us taken during the few minutes the sun was out!

Now, a benefit to our trip to FL was that during Mem. Day weekend, I saw a 1976 Toyota Land Cruiser for sale on our way back home from diving. I made my dad stop so that we could check it out. I have been looking at getting a fun car to play with on the side for a while, and this was one of the options, mainly thanks to my dad. Anyway, we looked it over and I liked it, so we decided that we would go back and drive it. Then, after driving it, I decided to give the owner, who was out of town, a call to find out more about it. It seemed to me to be a good deal and a right time, right place, kind of thing. I came back to DC to think about it, but after a day, I decided to call him and buy it.

This is where the 2nd trip to FL comes in. It was perfect timing, since I already had this trip planned. Well, we picked it up while we were down there, I changed my FlyI return flight and decided to take the Auto Train back with it! The train was painfully slow at some points, but I got to sleep, eat, watch a movie, and listen to music, so it wasn't all that bad. There were a lot of old people on the train and a few young ones. All in all, the trip from door to door was about 24 hours, but it was probably more pleasant than driving all the way in the LC. Here is a picture of it! 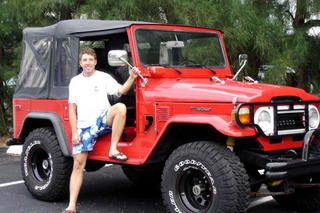