I survived the red eye back from CA yesterday morning. I basically slept the whole time I was on the plane. I always sleep on planes though. Some people think I snore, but I know I don't! I should get one of those horseshoe neck pillows, you would think with all the plane sleeping i do, that I would have one. The only issue I had, besides only sleeping like 5 hours, was that my neck hurt when I woke up.

So, on to the trip. Seeing Grant was awesome! It was so nice to see his family too, they are really nice and a lot of fun. I met a few of Grants friends that I had not met before, we went out to grab some drinks Thur. and Fri. I also did some bouldering on Fri., and I realized that it has been so long since I have done it, that I really suck now. Oh well, I am sure it would come back with practice. Then on Mon. while Grant had to work, his sister Riana and I went to the SF MoMA and the Batman Begin IMAX movie. We also had a nice bite to eat at an outdoor cafe.

The MotoGP and AMA races were a lot of fun, but there was one thing that I was not expecting. he terrible terrible traffic. I figured it would be pretty bad because the track was sold out, but when I had been to Laguna before, I remember there being plenty of parking and a few entrances. Well boy was I wrong!! It took us 2 hours on Sat. and about 3 on Sun. just to get into the place. Luckily, getting out wasn't as bad of a problem. And fortunately, we didn't miss a single race, just some practice and qualifying. I decided that next time I go to an event like that, I am going to ride my motorcycle so that I can get out faster than all the car like all the bikes did.

The other thing that was disappointing to me was that we were not able to get up close to the bikes and such. That is only because I didn't buy a pit pass. I am not sure how close to the MotoGP bikes we would have gotten with the pit passes anyway. However, the races were great and 2 of the guys that I wanted to win, Nicky Hayden and Eric Bostrom, both did, so that made it even better! I am so excited that I was there for Nicky's first MotoGP win!! 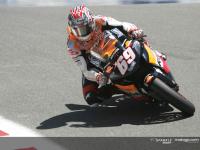 Here are some shots of what we missed in the pit area: 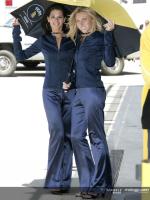 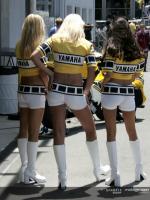