I have been on a roll the last few weeks with my softball teams. I think I said this before, but I play in 2 different leagues, one with a bunch of friends, and one with some GW alumni. The friends’ team was not very good and we hadn’t won a game all season long, until the last 2 weeks, we won them both. They were both very good games too! I played pretty well, better on offense than I was on defense. I had 3 errors in the first win at 3rd base, but in the 2nd, the ball didn’t come to me, so I was fine. I think I was 5-6 with 2 RBI’s at the plate though, so that was good. 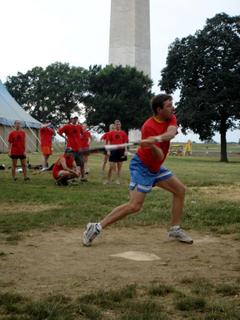 However, the best playing that I had, came with my GW game, where we won the last 3 games that I played in to go 4-3 with one game left. I played very well on both offense and defense in those games. It must be something to do with the Thursday games instead of the Tuesday ones. Both of the teams have playoff games starting the week of the 15th, but I will be in Norfolk for a class with the Navy, so I will miss them. I am hoping that my teams will step it up and win for me, so that I can play the following week in the Semi’s. Let’s go softball teams!!
OK, Fine. Photo Credit goes to Nate.
Rambling by Tyler at 5:00 PM

I am claiming photo credits! -Nathan