This past weekend was my sisters Fall Break from school, so my parents decided that the three of them were going to go to Nantucket for the weekend, since my sister hadn't been there before. They had gotten rooms at 2 separate B&B's, one as a gift and one at an auction, so they had some room to spare. Well, since I hadn't been to Nantucket either and wanted to go, I decided to tag along. It also helped that I had a plane ticket on FlyI that needed to be changed.
So off I went to Providence on Friday afternoon, then jumped on a small Cape Air flight over to the Island. I had been watching the weather during the week before this, because I know in October, things can be iffy. There was a big storm that came through the mid-Atlantic Columbus weekend, which dampened Oktoberfest. Well, that storm decided that it was just going to hang out over New England for the next week. So flying into Nantucket on Friday evening was not the nicest weather. I could catch glimpses of things out the window of the plane, but it wasn't until we were landing that I could see anything of substance. 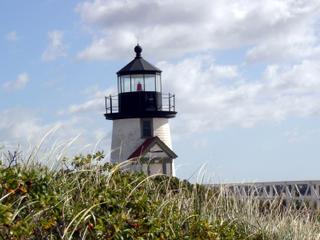 Despite the rain, my first glimpse into the island and town of Nantucket was good. We headed back to the B&B that our friends owned to have some appetizers before going out to dinner. We went to a really small restaurant that was named after a character from Moby Dick. It is a pretty weird name and I am not sure how to spell it, but it starts with a Q. We had to wait a bit, but had a drink at the bar, which is where we found out about the Whale's Tale Pale Ale, a Nantucket micro brew. It was good and we decided to make a stop by the brewery on Sat. Dinner was good also, I would definitely recommend the place.
Then we tried to find a good bar to go to, but nothing was really looking good until we tried a place called The Brotherhood of Thieves. We hung out there with the cool bartender and a wedding party that had taken over, and watched the end of the baseball game. Then I went back to my B&B and mom, dad, and my sister went back to theirs. I definitely slept in the next morning, partly because I knew it was raining and partly because I was tired. I even missed breakfast, but I wasn't too surprised since I was the only person staying there! I hadn't even met the inn keeper yet! 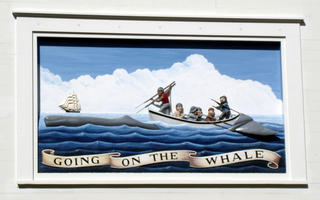 Since it was raining, we decided it would be a good idea to go to the Whaling Museum, which had just been renovated. It was a really cool museum. It is amazing what these whaler's went through out on the boats. I had listen to a book on tape last year about the whaling ship Essex, from Nantucket, so it was cool to see the exhibits in the museum. They have big sperm whale skeleton from one that washed up on the beach and died. The film about it was really interesting. After becoming educated, we decided to grab a bite to eat and then walk around town. But right after lunch it decided to pour, not just rain, so we opted for the car and took a little drive around the island.
That was how we stumbled upon the Cisco Brewery/vineyard/distillery. It was this really cool, out of the way place where they brew beer, make wine, and distill vodka, run, and gin. Cisco Brewers There were a bunch of people around, tasting all the different things they offer, so we decided to give it a whirl! We did 1 wine and 1 beer tasting. I thought it was all pretty good, but I especially like the Pinot Gris, which I bought a bottle of. And their pumpkin beer was really good too! I didn't try any of the hard liquor, but some of the people trying it seemed to think it was good. After our tastings, it was getting late, so we made our way back to town to get ready for dinner.

On Sat. night we went to a french restaurant that was supposed to be one of the better places in town. It was a very nice atmosphere and the food was good too. I had a pumpkin soup and a duck dish that were absolutely scrumptious. This was a pretty late dinner and the service wasn't speedy either, so we decided to head back to the rooms for the night. I went back and read more of the book that I had kidnapped from the other B&B and watched the end of the NASCAR race. Go Tony Stewart!!

The weather had started to clear a bit, so we decided to get up earlier and take another tour of the island and see some of the lighthouses. The sky was clear, but boy was it windy!! After visiting the 2nd oldest lighthouse in the US, we stopped to see some friends of my parents, and then went to get some sandwiches for a little picnic. We knew this would be a challenge with the wind, but we found a good spot by the beach that was a little sheltered. After our touring around it was off to the airport for our flights back home. However, the airport was packed because the ferries were not running due to the wind causing lots of chop, so it was a busy day. Fortunately we were able to get out and I just barely made my 20 minute connection in Providence. 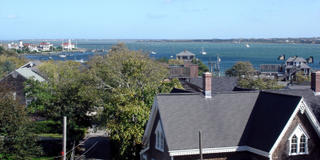 I made it home Sunday night by about 8 and made dinner and sat down to watch the Steelers game that I had TiVo'd! Unfortunately, I feel like I would have been better off not watching the game at all. It was awful in a lot of respects. Turnover Tommy was up to his old tricks and the O-line was not jellin like Magellin. Oh well, overall it was a good weekend in Nantucket! I am anxious to go back when the weather is better!!