After the race was over, we went back to the B&B because we didn't bring any beach stuff with us in the morning and I wanted to drop off all my stuff from the race. We ended up resting for a little bit before deciding what to do. There were several beaches that we could go to, and since we had a pass for the State Parks from my race in the morning, we decided to go check out Cape Henlopen State Park and try the beach there. Along the coast, they have a bunch of towers that were used as lookouts for ships and determining their locations. One of them was open for us to climb in the park, so we got a good view from the top of that. However, some clouds were rolling in and drizzling looked to be off in the distance, so we didn't spend much time at the beach, just took a little walk on it.
Then we drove through the town of Lewes on our way back to the B&B to change and get cleaned up for dinner. The weather broke a bit, so we went into Rehoboth and walked down the main strip and along the boardwalk for a bit before heading up the road to the Dogfish Head Brew Pub. The place looked like it was going to be fun and they had some good college football games on the TVs. We got a sampler of the beer to start things off. We quickly determined that AD does not like anything dark or really hoppy. I thought I was that way, but she is even more so! They have a Punkin Ale that is really good!! Dogfish Head They have really good wood-fired oven pizza that I had. I highly recommend it. They are opening a Brew Pub up in Gaithersburg, MD, so I am excited about that.
After our great dinner, we decided to head down to Dewey to have some drinks. That weekend was the closing weekend of the infamous bar, the Bottle and Cork. We were a bit early to head there, so we decided to hit up the Rusty Rudder for a bit. This was a great place, right on the bay, with a dock out back and a deck that had a steel drum band and a rock band setting up. 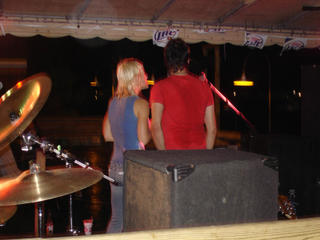 We sat at a bar table behind the band setting up because they had dinner tables on the main deck. Eventually the steel drums went away, they cleared off the table, and the cover band started to play. They played some great music. After the first set was over, we decided that we were going to stay here a little longer and head to the Bottle and Cork later.
Well, we continued to say that until the band had stopped playing and it was time to go home. At one point in the second set, it started to pour and most of the dance floor on the deck retreated to cover, but there were a few brave or drunk souls that stayed out in the rain. Eventually, we saw a girl running across the deck in some boxers and a tank top, which we thought was a little wierd. Then came her friend to join her in the rain, wearing a wedding dress. 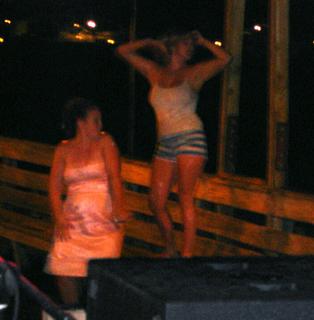 Little by little, the whole wedding party was at the bar, but not everyone went out into the rain. It was a very strange sight. The lead singer of the band was a very attractive girl, and there were some guys that the front of the stage that were drooling over her all night. That was definitely amusing. We also saw a guy who reminded us of Matt. But then at one point in the night, he just disappeared. Kind of fitting!
We had a fun night out in Dewey, but headed back to the B&B for some much needed rest. We slept in pretty late, getting right up before breakfast was over and had something to eat. We had to check out of the place by 11, but that was perfect timing since the outlet stores opened at 11! We did a whirlwind tour through the malls buying shirts, shoes, and pants. They had some great prices on clothes and no sales tax!! So much better than buying around here. After our shopping we went back to the boardwalk at Rehoboth and headed to the beach for a few hours since it was a nice day! We swam for a little bit in the ocean, but unfortunately, a rogue wave came up and swamped AD, dragging her along the shelly bottom of the ocean. She had some scrapes that didn't look to great, but she survived.
After that we grabbed some lunch at a place called the Purple Parrot, a really cool place, and then headed out of town and back to the district. The traffic was pretty bad on the way home, but we managed. Then I got to watch my Steelers whoop up on the Texans, since I TiVoed the game that day. Overall it was a really fun weekend and a good way to end out the nice summer weather.
Rambling by Tyler at 3:00 PM