I had my first of 2 weekends this fall where I went to back to back games of the Pens and Steelers in Pittsburgh. Unfortunately I could only come away with a 1-1 split from the weekend. I am hoping to improve that to 2-0 the first weekend in Dec. when I go home again.
The first game of the weekend was a big Pens - Rangers game at the Igloo. I had gotten some good seats for the game, for the first time seeing Sidney Crosby and of course Mario playing with him. I had my Lemieux jersey on and I was ready to see a good game like the one they played in NY a week earlier. Well, for some reason, I guess the Pens didn't know I was at the game, because they were playing terribly!! It was Jagr's first time back into the Igloo this year and he had a great night with a hat trick. The only good point for the Pens was Mark Recchi's great shot that scored our 1 goal. Oh well, lets hope things go better against Calgary next month. It was still fun to see Sid play. 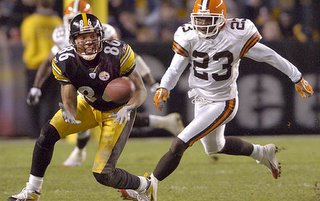 The second half of my sporting weekend was much better. The Steelers - Browns. The old rivalry. However, there has been talk that this rivalry is not flourishing the way it used to because the Browns just aren't any competition. I am not sure what our record is against them since they moved back to Cleveland, but it can't be much better than our record with the Bengals. This game was a lot of fun though. It was amazing to see my boy get a Steelers record for receptions. Go Hines!! And then his touchdown catch on the reverse option pass by Antwaan was awesome!! What better way is there to spend time on a Sunday night??
Rambling by Tyler at 8:00 PM