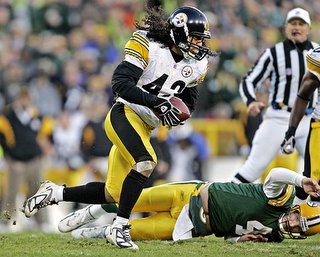 Well, my boy Troy Polamalu came up big in the win against the Packers on Sunday. He had 2 fumble recoveries and one of them he ran back for a touchdown. That one was not without the help of his rookie teammate McFadden though, who actually knocked the ball, and maybe a little bit of the stuffing, out of Favre. Charlie Batch did not play really well, but in his first start since 2001, he actually managed the game pretty well. I am sure that with this win, his confidence will be better going into the Sunday night game against the Browns. Cowher wants to rest Ben's knee one more week, so we'll be cheering for Charlie again. And I will be there!! Hopefully I'll be able to catch the Pens-Rangers game the night before also!
Rambling by Tyler at 12:09 PM