*Note: I am trying a new way of posting: Interactive. Click on the links scattered throughout the post to see more pictures*

Friday afternoon I headed home from work, took the dogs to the dog park, and headed to National Airport to jump a Northwest flight to cold Minneapolis, Minnesota. I had been watching the weather during the week, and it seemed as though winter was finally starting to set in up in the frozen tundra. I have been to Minneapolis-St. Paul airport many years ago, but I had never really set foot in MN, so this would be a new state for me. I have quite kept up with my mom and sister on the state front, but I’ve done pretty well. 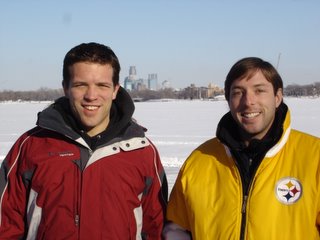 My freshman year college roommate, Nate, decided that he was going to move back home to MN about a year and a half ago. About 4 years ago, I had taken Nate up to the burgh to go to a Vikings – Steelers game, his first Vikings game. When I was trying to figure out a time to go out to MN to visit Nate, I ran across the 2005 NFL match-ups. I saw that the Steelers were playing an away game against the Vikings this year. So I decided that I would visit that weekend, and we could go to the game!

I was hoping that it would be a nice early game, in September or October when the leaves would be changing and the weather would still be pretty nice up there. Well, when the actual 2005 schedule came out, there was a moment of horror. “Dec. 18th??? No way, that can’t be right!” Well, I figured it was better than January or February up there, so that was what led me to the airport last Friday.

Northwest decided to switch my flight on Friday going out, and since I had booked it so long ago, I hadn’t realized that my new flight was not direct, I had to go through Detroit. (I secretly wished that the Steelers would be going through that airport about 7 weeks from then. But I guess now it isn’t so secret a wish…) Plus, I arrived a lot later than I did before, at about midnight. Nate lives really close to the airport, so I called him when we landed and we had perfect timing at the curb, he didn’t have to circle. We stopped off at this total dive bar right near his house that was pretty cool. It is a tiny place and they have karaoke pool, and they completely violate the smoking ban.

On Sat. we decided we’d do a driving tour of the Twin Cities, or the Cities, as the locals call them. There was a bunch of snow on the ground and the lakes were about frozen over. There are a number of lakes in the area near where Nate lives and they looked beautiful in the snow. Around most of the lakes and in-between them are miles and miles of running and biking trails. I was very surprised by the number of people that were out in the cold weather running and being active. What a great place it is to do that. I can imagine that it is 10 times better in the summer when it is warm. :) 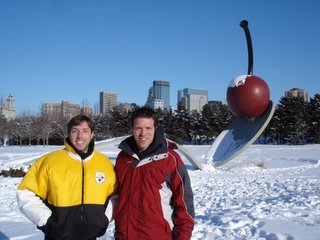 We continued our tour of the city, seeing all the fun places to go hang out, restaurants to have dinner, and bars to have drinks. We went to the sculpture garden and saw the Spoon and Apple and saw the Frank Gehry glass fish. We ate brunch at this small little shack that served Cuban food and the mango waffle that I had was really good. We saw the U of MN and the first official lock and dams on the Mississippi River, even though they aren’t called locks 1 and 2. Then we headed home to gear up for the long Saturday night that we had ahead of us.

One of Nate’s friends, Hannah, from high school was having a Christmas party up near when Nate grew up, so we went up there to say hi and see his old stomping grounds. Then, Nate had surprised me with tickets to the hockey game, so we went to St. Paul to see the Wild – Canadians game. It was an amazing arena!! If the Penguins don’t leave the burgh and we get a new one, I hope it is built like the Excel Center. The game was great too, and the Wild won in overtime! From there, we were headed out to meet a group of Nate’s cousins and a few co-workers at a neat German place that has polka and huge mugs of beer. We stayed there for a while and I had 2 big mugs of beer. It was a good night and I certainly had no problem falling asleep. (passing out as some may call it.)

I wake up the next morning, very early, to some beer bottles clanging as they are being prepared to head to tailgating for the big game that afternoon. However, it was waaay to early for me to be getting up. It was just Nate on his way out the door to church. I was still out of it and needed some extra rest before it was time for drinking games in the parking lot. I got up with a few minutes to spare, got all my Steelers gear on, grabbed a 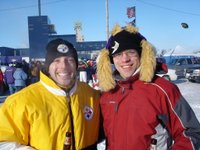 quick drink of water and some hot chocolate to warm up, and out the door I went to catch the 9:50 light-rail into the city to meet Nate at the Metrodome.


We headed off to find some of Nate’s bosses who had gotten up early to drag a bunch of food, drinks, firewood, and games down to the stadium to do some hardcore tailgating. I was very impressed with the set-up that they had. There was a shelter area, a grill, a fire-pit, and a games area. We had some burgers, drank some Leinie’s, a Wisconsin beer, and then played Beer Darts and a golf ball throwing game. All of this in the wonderful 3-degree weather!! My toes and fingers got a little cold, but then we would head over to the fire to stay warm. It was almost noon and time to head to the game!

There were a good amount of Steelers fans in attendance, so I had some good company. All the scalpers who sold their tickets to the enemy were blasted by Tice. It was interesting being inside a nice warm building, quite a change from the weather outside. It almost felt surreal though, like it wasn’t a real football game. The game was a lot of fun and the fans around me weren’t too bad. They didn’t even say anything when the Steelers would do well and I would stand up and wave my towel. Must be that mid-western hospitality. At one point Cowher was really pissed at the refs. But it was nice to walk away from the game with a win. It made the 3-degree weather worth it. :)

After the game we stayed up in the city and walked around, shopped, ate dinner, and waited until the Holidazzle parade was going to begin. We went to the corner where my relatives used to live, or something like that. Then I bought a few Christmas presents in town. For dinner we went to an Irish place, Britt's Pub, and caught the boring second half of the Skins game. Finally it was time for Holidazzle! And what a parade it was. I think there were about 10 floats and it lasted about 30 minutes. There was a train, a snowman, light bulbs and Santa. They do it every evening. After that, it was back to Nate’s to watch some Sunday night football and crash after the long day that we had.

I was leaving Monday at 1:00, so we had the morning to tour around St. Paul and to stop by the Mall of America. St. Paul is a nice city, not nearly as busy as Minneapolis, or as big, but still nice. There are some great homes and a lot of small colleges in the area. It is also the state capitol and it is a beautiful building. The Mall of America was pretty cool though. It’s laid out in a nice way, with rollercoaster’s and rides in the middle of the building and all the stores in a square around it. I did a little bit of my shopping there, enough that I had to check my bag on the way home so I could carry on the gifts. However, a few of them I bought for myself. :) 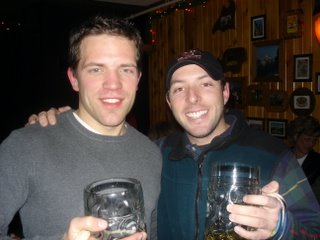 I had a fabulous weekend up in MN visiting Nate and seeing the Twin Cities in the cold. I am definitely glad that I didn’t go further into the winter and I am now looking forward to going back when the weather is nice so that we can explore the lakes and the outdoors.
Rambling by Tyler at 3:45 PM

Awww, what a cute couple.

T, you look ghetto fabulous in that puffy coat and Timbalands, yo.

Tyler, I'm glad you managed to have a good time despite the extremely cold weather last weekend...I am disappointed you decided not to post more pictures of your crazy dancing moves from the evening at Gastoph's!