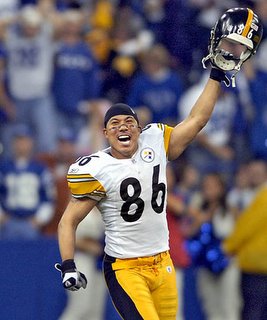 Wow, Wow, Wow, Wow!! The Steelers are headed to the AFC Championship game 2 years in a row!!! The finish to that amazing game on Sunday was waaaay too close for me. I think my heart stopped a little bit after the fumble. I could have been pronounced legally dead... But thanks to the Football Gods, I survived! I think Big Ben had it right, the Steelers were going to need their A+ game to beat the Colts B- game, and that is exactly what happened. The Steelers came out firing on all cylinders, making big plays, and stopping big plays. Through 3 quarters, the Colts were held to 3 points. Who would have guessed?? Whether it was the great game plan that the Steelers had or the "rust" from the Colts, the dominate team won the game!! 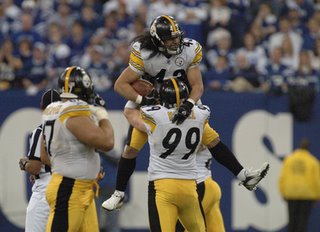 This is the way that the game should have ended, with over 5 minutes left, my boy Troy made a great read and intercepted a pass from Peyton, to all but seal the game. As he was getting up to run with the ball, it popped out, but he recovered the fumble. However, the moronic referee, Pete Morelli, decided upon review of the play that it was an incomplete pass. According to the NFL head of refs, Morelli ruled incorrectly and the ball should have stayed in the hands of the Steelers. Thank God that this idiotic ruling did not change the outcome of the game! That was just one example of the terrible officiating from this past weekend. 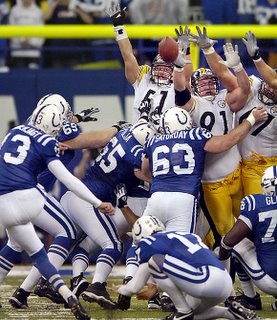 I am not sure whether the Football Gods were looking down at Vanderjagt and exacting their revenge on him for his many stupid kicker comments or whether they were exacting revenge on Morelli's terrible call. Maybe Joey Porter was correct, Morelli pulled a Pete Rose and had money of the Colts, but either way, we are going to Denver!! I am feeling pretty good about our chances next Sunday. Even though the Broncos will be able to watch the tape and see some of our schemes, I am hoping that we can return Plummer back to his roots as "Jake the Snake!!"
And for any of you who are dying to know where I watched the game, I stayed at home with a bunch of friends and had a good time. I decided against waking up early and going to the Pour House in lieu of going to the gym to work off my nervous energy on the bike. I am looking forward to another great game next week, GO STEELERS!!!!
Rambling by Tyler at 9:00 AM