Unlike most of my good sports weekends, this one did not involved actually going to see any games live. It was a bit different, but good despite that. It started on Saturday morning with a great trip out to Schaeffer Farms in Germantown, MD for some good mtn. biking with some people from the DC Tri Club. We had a few technical issues like a broken chain and a broken free wheel, but it is better to get this stuff out of the way at the beginning of the season. The weather cooperated with us and it was a great day on the trail. I am looking forward to a good season of mtn. biking! The rest of my Saturday consisted of the dog park and some college basketball. I decided not to go out on Sat. night because I was going to have a pretty early morning on Sunday and I just wasn't feeling it. However, I didn't get anything accomplished around the house like I was thinking I could. I was drawn to small naps on the couch while watching basketball instead. Oh well! I wasn't vested in either of the teams, other than my brackets, in which I was in first place in one and third in the other.

My early Sunday morning consisted of the Backyard Burn trail run with EX2 Adventures at Wakefield Park. I only did the 5 mile option, instead of the 10, but it was actually 5.5. I finished in 42:22. I was very happy with my finish since I hadn't run at all since that Tuesday when I complained of my shins killing me. I had ridden the bike, just to stay active though. I took my regular pre-race Aleve and was hoping for the best. My strategy was to go out pretty strong at the beginning to get in front of people, so I could run my pace. I am much more comfortable letting people go by me on the single track trails than I am passing people. My shins held up fine, thanks to my Aleve! But this morning they were a bit sore. I guess I need to stay away from the running for a bit longer and try to rehab some more. In my age group, I was 7th of 25 guys and overall I was 23rd out of 174 five milers. I am also 13th in the points after missing the first race! 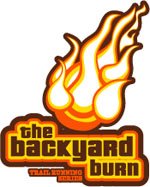 After the race I headed home to warm up. The weather was a bit cooler than I expected and the wind picked up a bit at the end and I got a bit chilled. Then it was off to the dog park to let my babies get some exercise, since I had already had my fill for the day. Then it was time for some lunch and my spot on the couch for an afternoon of more sports. There was plenty to watch on TV yesterday: college basketball, 500 laps at Bristol, the IRL opening race, and the MotoGP opener in Spain.

Unfortunately, the first thing I saw when I turned on ESPN for the afternoon was about a tragedy in the IRL series. During the final practice before the race, only 3 minutes in, there was a fatal 2 car accident with ED Carpenter, that killed Paul Dana, set to make his first IRL start with his new team of Rahal-Letterman. This was not the way that I wanted to start my Sunday sports watching.

College basketball continued to thrill people, even though it killed tons and tons of brackets all over the country. I had both UConn and Villanova winning, but the games were exciting. Well, the Mason game more so... I may be a fan of a differnet George and I may have been against GMU getting a bid, but I will say that I was wrong. They have proved their worth as a Tournament competitor. However, I'll be rooting for the Gators to take on the Bruins in the final game. No real reason why, just what I have decided. 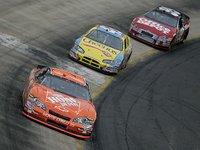 The NASCAR race was good up until the end, when "Smoke" kept falling further and further back. After leading the most number of laps, he again struggled to have the finish that he wanted. The handling just wouldn't stick with him... At least he moved up a bit more in the points. And as for drama, Bristol didn't disappoint. I wonder how many points Gordon will be fined for his little shove?

Despite the tragedy mentioned above, the IRL race at Homestead had a fantasitc finish. The last 10 laps had side-by-side, tire bumping, 3 wide racing excitement. Add to that a photo finsh pass right at the stripe! I wanted Helio to win, but was happy that Dan was able to get past at the end also. I didn't watch the MotoGP yet because I had to get to the grocery store so I could have stuff for lunch this week! Hopefully it will be jsut as thrilling.
Rambling by Tyler at 1:00 PM

Sadly, there's no way Gordon gets fined any points for his shove. NASCAR continues to chicken out regarding the drivers aggression towards each other. Tony really needs to finish one of these races off though, he's had such good runs the last 3 tracks. At least Johnson finally had a bad day.

He may not get fined, but we'll see tomorrow. They seemed to work out their difference after the race though. I know, Tony better get some good luck soon, his cars seem to have been really strong so far this season.

I can't believe you're rooting against GMU! Jump on the bandwagon...there's still a little space left. Florida's going down!

Wow. And I thought my weekend of kickball and competitive drinking made for a good sports weekend.

I wish I had managed to watch more of the basketball. I love the fact that only 4 out of 3 mil using ESPN's bracket predicted this final four.

Al, Nate: Yea, I am just not feeling the love for GMU. Maybe its because my Grandfather got his law degree from Florida.

BatL: Kickball and competitive drinking definitely make for a good sports weekend. I should have done those too, my weekend would have been amazing!

The real question on those 4 brackets is whether they were the only brackets those people submitted.