Matt, Al, and I had a good trip to Greensboro for the GW - Duke game, even though GW didn't come out on top. I decidded that it would be a good idea to take a nice long day trip since had never been to an NCAA Tournament game, it was the first time since we had been at GW that they were in the 2nd round, and it was a chance to see a good Duke team play some ball.

After going out to Buffalo Billiards for just a little while on Friday night, I dragged myself out of bed at 4:45 on Sat. morning to get ready to leave DC by 6:00am so that we could make it to Greensboro with plenty of time to spare. There was a GW Brunch at the Coliseum before the game and we wanted to check that out. We met at some friends apartment in the morning before heading out so that we could carpool down together. Our first adventure of the day was stopping to grab some coffee and donuts in Fredricksburg, VA. We couldn't find a Dunkin' Donuts, but we found the next best thing, Donut Connection! It was a complete rip off of DD with almost identical packaging, but very entertaining at 7:00 in the morning.

The rest of the drive was pretty uneventful. It was early and my companions drifted in and out of sleep. I decided to take the dogs with me because I could let them out, feed them, make sure they were ok, better than I could if I had left them at home. I hardly heard a peep out of them the whole time and at one point thought I forgot to put them back in the car after a stop! It was a good thing that we left a bit early because we needed it to figure out exactly where we were going. At one point I was ready to have Matt break out the computer and use the AWESOME wireless internet to get us to google maps. But we made it, and there was still food left at the brunch.

Here is a pic of me and Al at the brunch and you can see good old SJT to the left in the background. And here is one of Matt. This one takes the cake though. There was a pregnant woman there who decided to go all out with school spirit. The picture unfortunately doesn't show just how pregnant she was. After we had enough of the food and drinks it was time to head up and watch a bit of the warm-ups and get ready for the game!! 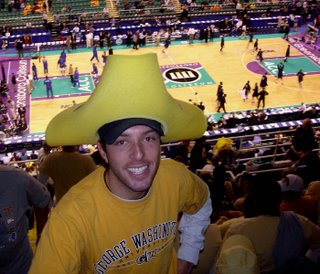 As they were introducing the players, I was getting pretty excited about the potential upset that we could witness there in Greensboro, but after the first couple minutes of the game, I could tell that GW did not bring their A-game to the table. What a shame. They were playing pretty well defensively, but they were taking way too many shots, just trying to get the ball toward the net and not actually trying to get it IN the net. The GW crowd was pretty into the game no matter what the score was. We saw GW come back on UNC-W from 18 points down, so we knew they could do it. However, the fact that it was Duke and not UNC-W was always in the back of my mind. 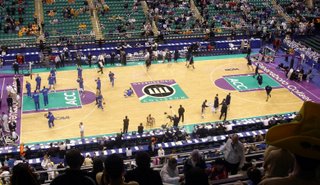 After watching Duke play live, you can see what a good team they are. Especially when JJ and Williams get help from the rest of the team. The 2 freshmen, McRoberts and Paulus, were a good supporting cast. It was amazing to see how big Williams actually is compared to everyone else on the floor and to see how amazing some of the shots are that JJ can throw down. He is a truly impressive player. The Dukies definitely had the better team on Saturday, but I enjoyed the game and the quick trip nonetheless. After the game, the GW guys huddled at mid-court and then turned to the GW fans area and acknowledged us. It was really nice to see.

As Mike Wise said in his Post article I think that GW will have another shot at getting further in the tournament next year. It was a great season! And I'm looking forward to the next one.

The trip home wasn't anything exciting. We stopped at the same Wendy's in VA that the Colonial Band members did, but that was about it. Matt got to use my new favorite toy, my wireless interent in the car on the way back, giving us updates on some of the other games going on. He also sent an email for me. Very cool. Hopefully I will not have to drive on any trips in the future so that I can use it!!!
Rambling by Tyler at 10:00 AM