I had a great "spring like" weekend. The weather was great and my Mom was here. (More pictures to follow a bit later.)

It started Friday night when I went out to dinner with my Mom and some friends of hers. After that we headed to G-town and Tony and Joe's to meet a friend for some drinks and we watched Pitt beat Nova. We called it a pretty early night because I had to get up on Sat. morning and help a friend move. Luckily he didn't have a huge amount of stuff to move, so it went pretty well. I did have to take a small break at 10:00 to start-up my computer and get online to buy 4 Buffett tickets for the August 3rd show at Nissan!! Very excited about that!

Mom and I then went to get some sandwiches and had a little picnic lunch before taking the dogs to the dog park. Since it was so nice out, there were so many people (and dogs) there. Max and Chloe decided that because it was so warm out, they would go for a little swim in the stream. This didn't make me happy because I was going to have to clean them off once they came up and rolled around in the dirt! After spraying off the dogs, I had to run down town to pick up my race packet for the St. Patty's Day 8K that I was running on Sunday morning. The city was packed with tourists, but we managed to get in and out without too much trouble.

A friend of mine had a Gala on Saturday night to raise money for the Avon Walk for Breast Cancer. And since it was such a great day, Mom and I decided to ride our bikes down to help her set-up that afternoon. Once things were in order, I went home to change and get all cleaned up for the event. I decided to buy a new bow tie and cumberbund for the event. Well, actually it was just an excuse... I had wanted this one for a while now. It is a raspberry color and has margaritas, limes, and salt shakers on it!! Very cool. But it did not come with a pre-tied tie, so I had to spend a little bit of time learning how to tie it! I managed to get it done. It wasn't perfect, but it worked. 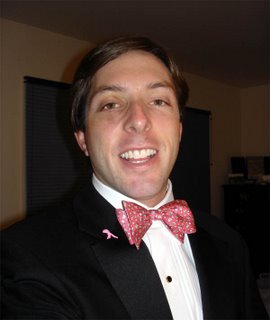 So off I went to the Gala with my friend Alison. We had a good time, had some good food, a few drinks, and didn't do any dancing. There was a little bit of a bright lights issue for us to get out on the dance floor. We had to leave a bit early though, because we were very popular and had to head off to a B-Day party also! We were definitely showing up in style in our formal gear! There was still a huge crowd partying despite the time we got there and the fact that a lot of people had gome to Shamrockfest in Ballston earlier that day! I didn't stay out too late though because I needed to be up early in the morning.

My first race of the season, the St. Patty's Day 8K, was on Sunday morning at 9:00. After Grant and Russ were here a few weeks ago, I got a bit of a cold. That made it really hard for me to prepare for the race because running was not fun when I was coughing and all stuffy. I finally got about a good week of training in, but I had a feeling that wouldn't be enough to do as well as I wanted to do. So, after not too much sleep, Mom and I headed downtown to the start line. The weather was really nice. It was in the low 60's, a good temperature to run in. There was a huge crowd this year also, the biggest in its history. I decided it would be better to go out with a faster group and fall back a bit, then to get stuck behind slow people at the start.

Off I went as the group started to move. I stayed to the left side of the pack so I could scoot by people on the outside. I felt pretty good and kept telling myself not to go out oo fast so that I would have a bit for the end. I passed Mom at the beginning of the hill up toward Union Station. Then again after we came down the hill on our way across the mall. I was feeling pretty good about the 3 mile point where the water stop was. I didn't take a whole lot of water, just wanted to wet my mouth. The last mile was the toughest. That is where I could have used the extra training time. I did have enough to sprint it out to the finish though! When I saw the clock, I was very surprised! I finished in 35:44, which is a pace of 7:09 minutes per mile. I think that may be my best pace in a race so far, which is pretty exciting. In my age group, I was 83rd out of 449 finishers and 347th out of 2249 men. I was happy with my finish.

After the race, Mom and I headed toward the mall only to find all the floats being set-up for the parade that afternoon. There was some interesting floats out there! We checked them out for a few minutes while waiting for the National Gallery to open so we could check out the Cezanne exhibit. I had seen it with Grant and Russ, but it was so crowded, I enjoyed going a second time. The rest of the day consisted of lunch, then the dog park, then sitting on the couch, watching basketball and Nascar, ordering pizza for dinner, and then watching my Sunday night shows. It was a good day and weekend overall!

However, there were a few things that happened on Sunday that were not so good. First off, Tony started off the race in Vegas well, and then fell back at the end in a disappointing finish. Then, the NCAA selection committee decided that they were going to royally screw GW and give them an 8th seed, playing UNC - Wilmington in the 1st round and potentially Duke in the 2nd round. That's the reward we get for having the best record in college basketball. I think it's complete Bullshit. But oh well, we have to deal with what we were given and I have the feeling GW will rise to the occasion. And lastly, one of my Steelers receiving corps, Antwaan Randle El is headed closer to me here in DC and the Redskins. I think he was overpaid, but I hope that he does well in DC. I know he will be missed on the Steelers, but we will be able to overcome his loss!
Rambling by Tyler at 12:00 PM