Another weekend and a Red Sox game

Wow, it's already Wednesday afternoon and I am just getting to a summary of last weekend... I guess that is partly due to the fact that I have been playing with the template of my blog more than writing posts lately. I still don't think that I have it perfect, but I am happy with it so far.

Where to start... I guess on Thurs., the start of the weekend. Yes, I know that I worked this Friday, but do Fridays really count as work days??? So on Thursday, it was a nice night and I decided to grill out and actually cook a real dinner for once. It turned out very well and I was mildly impressed that I still had some skill in the kitchen. Good to know that I can still bring it if I want to. Then it was a casual night at home watching a Netflix movie. It turned into a later night than I was expecting though, which may go towards the reason that I think Fridays aren't real work days...

Friday night I was able to scoot out of work while it was still nice and get in a quick bike ride before the rain came. It felt nice to get off of the bike in the gym and onto the bike on the trail. After I showered and had some dinner, I headed down to Old Town to Rock-it Grill for a little Blogger Karaoke. Even if you don't like singing Karaoke, it is still a fun place to go hang out, watch others sing, and have a beer. I-66 has a better summary of the night. I took waaaay too long deciding what I wanted to sing and my name was waaaay down the list, so I didn't get called up. But some of the others did, and they were much better than I would have been anyway!!

Saturday morning was not the morning that it was supposed to have been. I was going to head down to the crew regatta to watch a little bit, have some lunch, and then head up to Baltimore to pre-party for the Red Sox game. However, with the rain coming down like it was, I stayed in bed way too late, rushed to have lunch with a friend, and then met some other friends to head to B-more for the game. We definitely got some good pre-partying in at one of the local bars and since we hadn't heard whether there was a delay in the game, we headed to the stadium. As soon as we were inside, right about game time, this was our view: 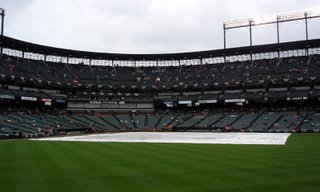 That is correct, there was no one on the field. And right on cue, there was an announcement that there was an unspecified delay in the start. Oh well, time to grab a beer and wait until the grounds crew started to remove the tarp. Nice, it was then time to get some good BBQ and then head up to the seats, finally! As you can tell, it was a bit cold. Just ask Matt. And I was totally unprepared. Which is why I was jumping around most of the game! I had forgotten my fleece as we ran out the door earlier. I survived though. Despite the temperature, it was a great night for baseball. 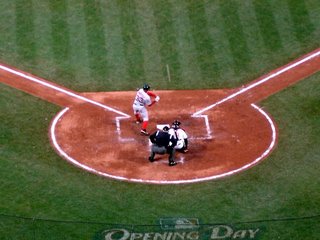 As you can see, I was playing with my digital zoom on my camera and did a good job at almost catching some contact at the plate. This one didn't come out quite as well. We had a good time at the game and the Sox won too!! It was a pretty new lineup compared to last year, so that took some getting used to. And they even ended up sweeping the 3 game series. I also had a little bit of fun with the camera as we were headed out of the stadium.

And don't worry, the night didn't end there! Once we got back to Arlington, Matt and I went to Dr. Dremos to meet up with some friends. I hadn't been there in a while, since it was nice enough to chill outside in the carport area. It ended up being a fun Saturday! And I definitely wasted more of Sunday than I had planned on... I slept late, then had some yummy apple cinnamon pancakes, and then watched a bunch of sports on TV. A pretty good way to spend the day, despite the nice, but a little cool, weather outside. Tony didn't win in Texas, but he had a good strong showing and continued his streak of leading a lap in every race this year. However, he did win the IROC race that they had on Sunday, so that was cool!
Rambling by Tyler at 2:15 PM