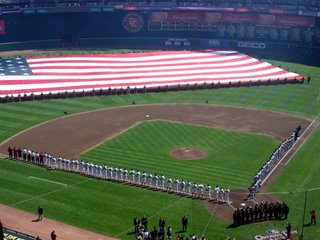 This was my feeling Tuesday April 11th 2006 when the Nats opened their season at RFK. I was playing hookey from work, at a Dr.'s appointment. The only appointment that I had was with the Mets. I scooted out of the office and headed to meet a friend at the stadium. We went pretty early due to the "increased security" for the VP who was throwing out the first pitch. However there didn't seem to be nearly then amount that there was last year for El Presidente. We were there in plenty of time to watch all of the opening day festivities. 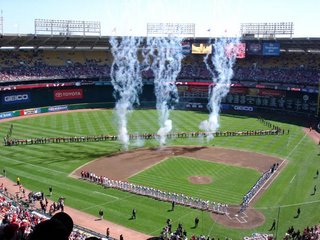 First came the introductions, and by far the loudest cheer was for the manager, Frank Robinson. After all the players were brought out, there was a nice rendition of God Bless America and a great job singing the national anthem by Placido Domingo. There were more fireworks and then it was time for Chaney to come out and bounce his pitch next to the plate. Forunately Schneider made a nice stop. There were lots of Boos as he walked to the field and even more when he threw it. Two guys in front of me were really loud! 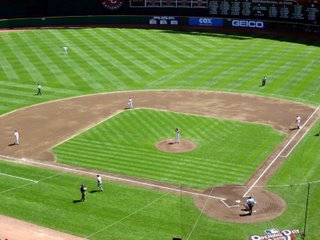 The game didn't go exactly as everyone had planned with the Mets winning 7-1. Ramon Ortiz did a pretty good job of holding the Mets for the first couple of innings, but hten they took off. And the Mets new young pitcher did a great job in his second start. Soriano hit a nice single shot to left field, but that was about the most exciting part of the game. But as the quote at the top of the page says, it was a gorgeous day at the park and I was happy to be there! I will be happier though when they announce an owner for the team!!!

Today I am off to catch the last game of the series in a few minutes. It's another nice day out, so I will be glad to get away from work before I head home for Easter. Let's go Nats!!!

Well, I think I repeated that quote at the beginning of this post numerous times today. It was a great day to be sitting at the park, but it was not a day to be a Nats fan. The Mets torched them 13-4 for the sweep of the series. Not a very good first 3 games in DC for the year. Oh well... A bad day at the ballpark is better than a good day at the office. And my Bucos didn't do too much better today losing 13-5 to the Dodgers. It is a long season though... and it will just get longer if they continue to play this way.
Rambling by Tyler at 11:15 AM