Nice Weather and the beginning of April (Part 2)

The weekend was only beginning after I got back from my excellent mtn. biking in MD. It was a nice night, even though rain was supposed to come in later, it was still pretty warm, and the Nationals were back in town for an exhibition game against the Orioles before starting the season. As I mentioned a week ago, I had plans to get together with the girl I went to dinner with. I just happened to have 2 tickets to the Nats game, so this was going to be our second date. It was a good night for the first baseball game back in DC since last September.

However, the game didn't quite live up to our expectations. There were a bunch of errors, mostly from the Nats, but from both teams. There were good hits, good base steals, but also some bad pitching and fielding. There wasn't a huge crowd at the game, but those around us, above left field, 3 rows from the top, were a rowdy bunch. From reading my comments above, you would think that I paid close attention to the game, but I didn't. I was merely a casual observer because I was a little distracted by my company and the conversation that we had. This was not a bad thing...

After my unexpected late night on Thursday and my long mtn. biking, I was dragging a bit after the game, so I called it a night after taking my date home. And yes, we do have plans to get together again in a few days. I did have to stay up a bit later though because my sister and her boyfriend were coming in later, all the way from upstate NY! As soon as they showed up and I chatted for a few minutes, I was in bed asleep. Saturday was definitely a sleep in for us and then it was time to head out and show B's boyfriend around DC since he had never been here before. As those who live here know, it was peak Cherry Blossom time and the parade was on Saturday. 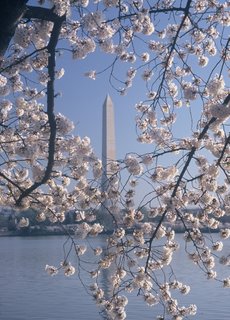 We drove through the city, stopping for Kev to get some pictures, and highlighting the main sights to be seen. We got stuck in the parade traffic, but got a chance to see the blossoms up close! Then we headed up to Dupont to grab some lunch and look around there. We wandered into a shoe store because B saw something she liked and after about 15 minutes of slow service, I walked out with a new casual pair of going out shoes! They were expensive, but very comfortable! After a little more sightseeing we headed to the grocery store to get some food to grill out while we watched some of the basketball games.

I was happy with the outcomes of the games, but I thought that the quality of the games was awful! I didn't think that Mason would win, but I figured after the way that they stormed through the beginning of the tourney, they would at least put up a better fight. They had a chance, but after several three pointers to open the second half, FL began to walk away. And LSU, I don't even think that they showed up to the court. They weren't in it from the get-go.

After the games, a bunch of us were going out the celebrate Al's new job!! We headed to Madhatter and Sign of the Whale. I decided that I was not going to dance that night and there wasn't a whole lot of it going on at Madhatter, so I was ok. However, then we moved on to the Whale and it was packed and I couldn't do anything to stop myself. It had nothing to do with the beers that I had been drinking either... Add the stupid time change in to this night, and it was a late one. By the time I got out of the city and home, it was probably about 4:00 or so. I knew that Sunday was going to be a bit rougher than I expected.

I had some plans for Sunday, or so I thought. B and Kev were leaving pretty early, they didn't come out with us, so I was woken up to say bye to them. Then I went back to sleep for a while until my Mom dragged me out of bed. After dilly dallying around, Mom and I went on a little bike ride around Arlington. We saw tons of open houses and places for sale. It is that time of year again. I was shocked when I realized that it was 3 years ago that I was looking at buying my place. For some reason I thought that it was only 2. It's amazing how quickly the time goes by!!

Mom had to leave to get back to Pittsburgh to pick up my Dad at the airport, so she left and I went back to my spot on the couch to watch racing all afternoon. There were 2 good races on at the same time!! The Nextel race at Martinsville, VA and the IRL race on the roads of Tampa. I was very happy with how the Martinsville race was going, Tony was either out in front for most of the day or he was trailing Jimmy Johnson. 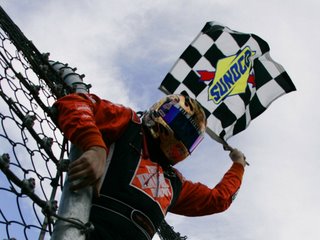 So I decided to switch to the IRL race. I definitely like the road racing better and this was a pretty good race. There weren't too many cautions until the second half. Helio Castroneves ended up taking the checkered flag on a yellow, but he definitely deserved the win. And true to form, he climbed the fence! The last time that he had won was last year at Richmond when were there to see it. After that race, I switched back over to NASCAR and saw Tony and Jimmy going back and forth with 50 laps to go. I knew this would be intense. You could tell from before the race that Tony wanted to get his first win, and he wanted it there. After a late red flag, he was able to pull it out over Jeff Gordon and take his first win of the season. And also true to form, there was a double fence climbing, as Tony climbed up to the flagstand to get the checkered.

So as you can see, it was a pretty busy weekend. But definitely a GOOD ONE!

I also want to add that I was very happy for the FL Gators and their championship!! As I said earlier, I thought that the games were awful this weekend, and that included last night. But the awful part of last nights game was UCLA, not FL. I thought they played a great game and definitely deserved to win! (at least based on the first half that I actually paid attention to.)
Rambling by Tyler at 11:30 AM