I have been pretty busy and haven't taken the time to post up anything lately, but I thought I'd give a general recap of what I have been up to lately.

I had a fun and busy first weekend in May. It started with a B-Day HH on Friday night at Continental, which was a pretty cool place. I then made my way up to Ballston to meet some friends at Bailey's where they were having some bands playing for Cinco De Mayo. They were pretty good. I don't remember the first one, but the main band was Gonzo's Nose.

On Saturday morning I was headed out for another good offroad workout to prepare for my races this summer. I met another DC Tri Clubber at Fountainhead and we rode 2 laps of the biking trail and then ran on the hiking trail for about 4 miles. Despite more issues with my bike's gearing, I felt better than I did the week before. It might have had something to do with the fact that I had a bit more to eat before heading out this time. I fell again, but this time I just bruised the right side of my butt. It's getting better though, there is some color to it, but it doesn't hurt. After that, I needed to hit the driving range to remember how to swing my golf clubs for an event that I had signed up to play in. It was such a gorgeous day! 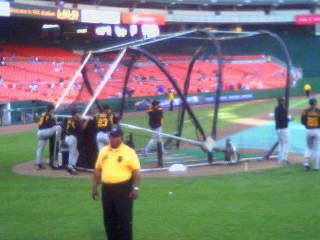 I then picked up some friends and it was off to the baseball stadium to watch the Pirates take on the Nationals. Both struggling teams... I wanted to go a bit early for the game and watch the Bucos take some batting practice. Of course, I forgot my camera, but I did take that one picture with my phone. I didn't try to get any autographs from any of the players, but it was fun watching the kids all around get excited for them. I got a bunch of comments on my old school Van Slyke jersey. It was a pretty good game. At first I thought it was going to turn into a hitting match, but the pitchers settled down and we had a number of scoreless innings with the game tied at 4. We went into the 11th inning and with 2 outs, Jason Bay hit a nice shot to left field, below our seats to take a 5-4 lead. And that was how it would end. The first time that I have seen the Pirates win in person in a really long time!!!

We were supposed to go out after the game to celebrate another B-Day, but it was late, parking was terrible, and I had to get up really early on Sunday, so we jsut headed home. I was volunteering to work an Aid Station at an offroad marathon. I was at mile 9.3 for loop 1 and mile 22.4 for loop 2. It was a nice day to be out in the woods and I enjoyed giving all the runners the support that they needed. Since there was no way in hell that I could run that far anyway... The EX2 group is really great and I had a lot of fun with them. I am thinking about getting more invovled. Like I need something else to get involved with, right???

After practicing at the driving range on Sat., I was ready for the office golf tournament yesterday morning. It was a pretty nice out, just a bit cool. But it wasn't raining and I wasn't at the office. We were playing a scramble format, so that was nice also. We cracked open some beers and hit away, starting on hole 3. Our team didn't win, but we did pretty well. We were about mid pack in the results, coming in at a 4 under par 68. Unfortunately I had to go back to the office for a bit, before taking off for the 4th softball game. We are about half way through the season, and I knew it was time for a win. We were going to have a good team assembled also!

And I was right! We won 14 to 6 and we are now 1-3, not at the bottom of the standings anymore!! I didn't have my best game hitting or pitching. I was lucky that the other team wasn't really smashing my pitches and they were swinging at everything, even the bad ones! I think we are on a roll now, hopefully our luck will carry into next week!
Rambling by Tyler at 5:15 PM