My Reunion and a B-Day

I am back from New Jersey and I had a fabulous time at my reunion!! It was such a blast to see people who I haven't seen in such a long time. It was also nice to reconnect with some friends who I have lost touch with. We only had about 50 people registered out of a graduating class of 200, but by the time the weekend was over, probably 75 people had come and gone at some point. As is to be expected, some people had stayed exactly the same and others have definitely "grown-up." I feel that I have gone through a good change in the 10 years that it has been since graduation.

The weekend started on Friday afternoon when I got to school and got registered. I poked around the Kirby Arts Center where I spent the majority of my time on campus, other than when I was sleeping. The theater looked good and I was really surprised to find that a sign that I hung in the lighting booth 10 years ago was still there! Then I ran into some friends who had just registered and we walked around campus to check things out before going to get ready for the Friday night shindig. 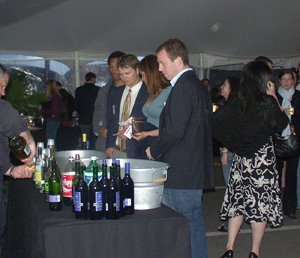 The first night, all the reunion classes were together in one big tent on campus. A few of us decided to meet in the hotel lobby to have a few drinks before heading over to the school. There were a lot of familiar faces when we got to the tent. We proceeded to get more drinks and then nibble at the food. It wasn't a real meal, lots of good snacks. However, that would cause problems with the fact that I didn't eat enough of the yummy snacks to offset the drinks I was having. After chatting with lots of people, it was time to head back to the hotel for the afterparty. We hung out at the bar until it closed. This is where things start to get fuzzy, but we bounced around to some peoples rooms where there was beer to be drunk.

I ended up in my bed and I jumped up awake and looked at the clock to find that it was after 12 already. I jumped in the shower and headed back to school for the picnic. I had missed the class procession in the morning, but apparently I wasn't the only one, since there were only 2 people, and they bailed so they weren't the only ones. So finally people started to trickle in to lunch. Afterwards we headed over to our old dorm to check things out and then made our way to watch the lacrosse game. It was fun to be back on campus just hanging out on a Saturday afternoon.

On Saturday night, all the reunion classes were split up into their own dinners. The '96ers were put with the '01ers though. Things got going pretty slowly on Sat. night. A few of us headed over to campus pretty early and we were just chillin, waiting for everyone else. This was the night that more people showed up for. I saw a number of people who I was not expecting, which was cool. I definitely made a point to eat dinner and I was not quite as drunk as on Friday night. I decided that the afterparty was going to be a bit much for me, so a few of us went back to the hotel where the '01ers were hanging out and then a good friend and I went back to my room to hangout and crash.

I slept in on Sunday morning, after Eliza had to leave waaay early to get back to Philly to meet her parents. Then I went back to campus to grab some brunch and say goodbye to anyone who managed to get up and head over there. We have some good family friends in the area, so I stopped over there to say hi, but their daughter was home alone. I chatted with her for a bit and then hit the road back to DC. It was a successful weekend!!

I also realized that my B-Day is a week away... I will be 28, officially into my late 20's. I don't worry too much about the number though, I don't feel that old. Except when I realize that I can't drink like I used too... I will be up in NY at my sister's graduation and coming back to DC that day, so I don't have any big plans to celebrate. But I will be in FL for Memorial Day weekend, so I will get a chance to celebrate then!
Rambling by Tyler at 9:30 AM

i was up in NJ for a reunion too (but for grammar school) and heard too late that the lville reunion was this weekend as well!! i wish i had stopped by to see if i ran into anyone :-) one of my friends was an 01er though i think - ariella? her dad taught my class at my grammar school, actually. glad you had fun... i'm not sure if i'll hit up my 10yr or not. don't they make you pay a crapload of cash to go?