Well, I survived. And I finished the race. That is the most important thing to be taken from the weekend. It was not without trials and tribulations though... But overall it was a great weekend!

I was going to leave Friday afternoon and head down to the New River Gorge and camp out for two nights, but I decided that I would leave Saturday morning instead. I got to the gorge about 2:00 and headed to ACE Adventure Center to check in for the race and to set up my campsite. I picked a nice spot, got the tent all set up, had some lunch, and decided that since it was a pretty nice afternoon, I would ride the bike around a bit to check out the area and maybe a few of the trails.

I am glad that I checked them out on Saturday afternoon. It probably didn't make a huge difference in my race on Sunday, but it made me feel more comfortable knowing that I'd seen part of the trail and it wasn't too bad. I got back to the campsite and there were a few more people who had set up tents. I had 2 guys right next to me who drove up from VA Beach. After chilling out for a while and reading, they were headed down to the dining hall to the pasta dinner for the racers. I grabbed a ride with them and we met a few more people while we were there.

After dinner I hung out in my crazy creek chair with my book and my XM on the Nats game until the sun was getting too low to read and the dark clouds were starting to roll in. I decided that was a good time to head to the shower house to get ready to hit my thermarest. As I was heading back to my tent, I saw a flash of lightning and then a few rain drops. Just as I made it back there, the rain started dumping! I grabbed all my stuff and dove into the tent. It lasted about 20 - 30 minutes and it was a pretty hard downpour. After being out on part of the trail earlier, I knew that it was going to be an interesting ride the next day!

I woke up nice and early at a little before 6:00. I took my time getting out of my sleeping bag and getting dressed. Once I got out of the tent, it was very foggy out. I was a little worried about jumping in the river and swimming with the fog, but I thought it might clear up by the time things started. I then got everything organized for my transitions, got the bike on the car, and headed to the finish line to get ready. I was early, or actually they were running a bit late, so I had plenty of time to get all set up. Then we had the pre-race meeting. This is where things started to go a bit downhill. 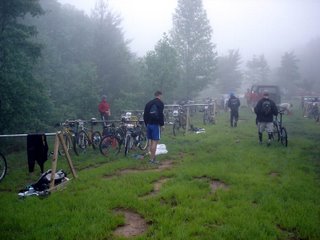 The organizers were reporting the water temperature to be 63 degrees and was an average of 2 feet deep!! I was not very happy to hear this, considering that I only had a wetsuit top with me and lots of other people were getting all dressed in full suits. I was also worried about hitting rocks int he shallow water. This race is very peculiar in that we had to get on a bus from the finish/transition #2 area where we had the meeting and drive down to the start and the transition #1 area on the river. We didn't take anything with us on the bus that wasn't going to be used in the swim or the run, so we were wearing out wetsuits and had our running shoes with us. The bus ride down was pretty long and a bit chilly, which made me even more nervous for the swim. We dropped off our shoes and other transition #1 gear at the river take out point. There was only one issue with this transition spot, the gravel between the river and the area where we were setting up. Then we hopped back on the bus to go to the 1.5 miles up river where we were going to jump in and swim!

We get off the bus, walk a few steps down to the water, and then we hear 2 minutes to the start. Talk about jumping right in and going for it! They had some kayakers that were going to be out in the river with us to help guide us where the water was deepest. The 2 minutes were up and it was off to the races. I was about mid-pack when we started. I was a little worried, as I mentioned earlier, but the water ended up being MUCH warmer than they reported and I was fine. I struggled to get comfortable though. I am not sure exactly what it was, but I guess I was still nervous. I don't know if it was first race of the year jitters or the river part of the swim or what, but by the time I got comfortable, I think most people had passed me. It took until the final 3rd that I was actually swimming normally and taking my normal breaths. About halfway through I banged my left ankle on a rock as we went though the small class 1 rapid. It didn't hurt too much at the time and and I continued on downstream. I finished the swim in 48th place with a time of 32:45. Definitely something to improve on! 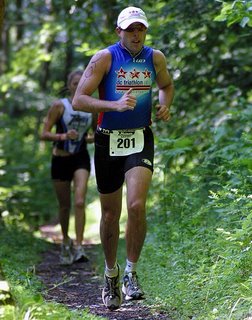 Finally, I had made it all 1.5 miles and it was time to get out of the water. The hike up from the water to the transition wasn't as bad as I thought it was going to be. I threw on my shoes, my number, got some water, had a goo, and off it was to climb the 1000 feet up to transition #2. We started off on a nice and easy railroad track bed along the river and I was feeling glad to be out of the water. This changed very quickly though. We turned to the left and headed off of the flat and I knew that something was wrong. The trail quickly turned into what would be a wet scramble over a bunch of rocks and leaves. I was not expecting this, but it was the start of the big climb. I kept plugging away and we eventually made it to a fire road. The rest of the run was pretty uneventful, except that the mileage signs were a bit off and I got confused. About half way through I felt my left ankle starting to hurt, which hasn't bothered me before. I was confused for a while until I remembered the rock in the swim... But it eventually went away when I got on my bike! I managed to pass a few people on the run, even though I got passed as well. I finished with a time of 1:25:22, for a 39th place overall in the run. I was feeling pretty good as I cruised into the transition #2. 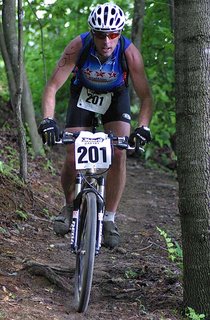 I was ready to hit the bike trails. I was a little nrevous about all the mud that was out there though. I knew that it would make the biking harder, but I didn't quite estimate how much. The first part of the biking was going well. I was moving along, had a few people in my sight to track down, but then the mud came. I managed to get through it pretty well, but it sapped a lot of my energy. Then came the big killer downhill that I did not ride the day before. This was probably a mistake... I could have used some knowledge about it. I was doing fine heading down and then all of a sudden i grabbed a bunch of front brake and my rear wheel came up a bit, but then twisted on me and threw my balance off. I didn't fall per say, but the bike hit my leg and a few of the big rocks that I was stopping for. I didn't realize it at the time because of all the mud, but I hit my rear disc brake on one of the rocks and bent it pretty significantly. Talk about a good way to slow me down...

After my shakey experience on the tough hill, a mile or so later I was following 2 people up an hill with some good sized wet rocks. The guy in front of me got off and started walking, but I made it around him, kept my balance, and then lost it a few pedal strokes later when my front end slipped on a rock. This time I bent my rear derailer hanger, so I was unable to get the bike into my granny ring. And I still had about 4 miles to go, a bunch of it uphill. At this point I was starting to struggle big time. I was losing energy very fast. I am attributing that mostly to the mub, the dragging break, and lack of a granny gear. A lot of people passed me during the last 3rd of the bike leg, but I was able to make it to the finish line, riding my bike. I had to stop a lot and rest my legs and gather strength, but I finished. I came in 43rd in the bike with a time of 1:37:58. 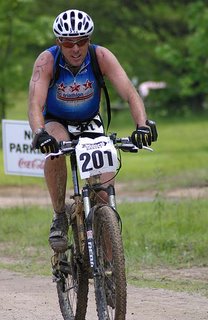 After recouperating and having some gatorade and bananas to revive myself, I felt pretty good about the race. It was the first one of the year and it showed me what I need to improve on for next time. I finished last in my age group with a time of 3:36:05 and 44th out of 65 competitors. I am sure that I could have done better, but now I will have some motivation for the next races. Plus, I will know to keep extra fuel with my at all times, cause you never know when you will run out of gas like I did. Overall it was a fun weekend. I had a good time breaking out the tent, something I need to do more often, and spending time in woods. Even if there was some pain invovled...
Rambling by Tyler at 11:45 PM

Yo, nice job out at ACE...that race is nuts from what I can remember. Get ready for alot of Xterra Richmond fun... any plans?