I don't think there are many things in sports that are better than a game 7 of the Championship series. I have to admit that I haven't been following the hockey playoffs very carefully this year, but I have caught a few of the Hurricanes - Oilers games. I knew that this game 7 last night was going to be a good one, and it did not disappoint. The game started fast, furious, and physical. Carolina scored first, less than 2 minutes into ther period. It was a very intense game, with some controversy at the end of the first period. The rest of the game was pretty close, the refs called a good game, they weren't too intrusive and let the guys play. And I was very impressed with the fans in Carolina. It felt like they didn't sit down for the entire game. Very cool. 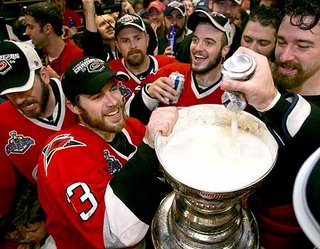 In the end, I was glad that Carolina was able to pull it out and win. And they did it with a 22 year old rookie goaltender. One of my Penguins, Recchi, was traded at the deadline to the Canes, so I am happy for him. As I said before, nothing beats the intensity of a final game 7!!

On another note, I want to say how great I think the fans are over in Germany supporting their teams. Take the picture below for example. What a great bikini! 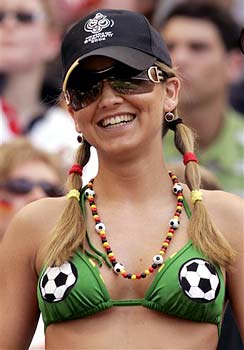 Gosh I HATE it when girls steal my bikinis. I swear I need to keep them under lock and key.

Sheesh, what's a girl gotta do around here!

Well, when you are on the cutting edge of fashion, that's the price you have to pay! :)