Longest Day of the Year

I hope that everyone enjoyed the longest day of the year yesterday!

My afternoon started out well, but didn't finish that way. Yesterday marked the start of my Wednesday night mountain bike races at Wakefield park in Annandale, VA. After my race this past weekend, I was feeling pretty good going into the race because I knew that the course was not nearly as technical. I got there pretty early and had enough time to get my legs moving again, since they were a tad sore from Sunday. I was in the second of the 2 races, so I watched a bit of the beginners and single speeds. Then it was time for our race.

There were a bunch of guys signed up for the sport race, which was 3 laps for a total of about 12 miles. I was probably too far back in the pack when we started, but I was chatting with a friend and didn't situate myself all that well. I will know better next time. I had a pretty good start though, despite my positioning and was off to a good first lap. Since it was 3 laps, I didn't want to go out too fast, so I settled in and rode a good pace. I was behind someone for the last half of the lap, but decided it was time to pick up the pace and took off in front of him. The second lap was going really well too. The course had opened up and I didn't have anyone pressuring me or anyone slowing me up. I improved my lap time a bit on the 2nd lap.

As I came across the finish line going for my final lap, I heard someone cheering me on! However, when I took the first turn into the woods, I knew that something was wrong with my back tire. I could feel the back end of the bike sliding around. By the time that I got to the bottom of the hill, all the air in my tire was gone. I have tubeless tires, so if the tire puncture's, that's the end of my day. Fortunately I was right by the finish line, so I didn't have too far to walk back. A walk of shame...

I was happy that I had been riding pretty well for the first 2 laps, which bodes well for my races this Sunday and next Wed., as long as I can get a new tire! However, I was pretty disappointed though, because this is the first race that I have ever had to DNF. Oh well, I guess that's what I get for riding on 4 year old tires. At least this didn't happen in one of my long triathlon's!!

PS. How could I forget the best part of the night!!! A local pro racer, Sue Haywood, decided to come out and race the expert women class last night! It was so cool. She rode by me on the way to the start and I was shocked to see her at our little Wed. night race. It was really cool. She was in the movie Off-road to Athens. 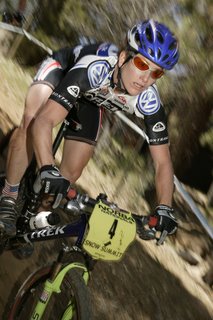