It has been about 6 weeks since I went up to New York City to visit some friends and go to a surprise birthday party. I am now just getting the pics organized to post up. This is because of several reasons. The main reason was that I brilliantly left my camera in NY. And I have also been very busy lately, so I haven't had much time to put them on my computer and get them uploaded. Well, I have now, plus I have also uploaded some from my other weekends out of town.

This was a very quick trip up to NY. I got a ride from my friend Carrie, who was headed from Richmond up to the party and then on to Boston. We got into the city at about 4:00 after a pretty rainy drive up from DC. We managed to get to the upper east side and find a parking spot about 3 blocks from where we were both headed. She went off to meet her friends and I headed to Peter and Melissa's apartment. We hung out there for an hour or so catching up on things and then decided to head out to dinner before the party. 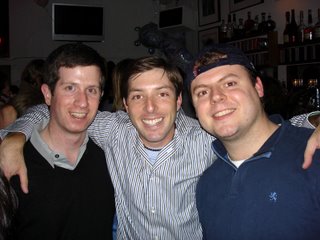 some old friends
We were headed down to the west village, which was a bit of a hike from where they live, but the trains we caught were perfectly timed, so it was an easy trip. The restaurant that we headed to was a small Mexican place. I can not remember the name of it, but it was good. It was also packed when we got there, but there was one small table for us in the back, between the kitchen and a table with a bachelorette party. We had margaritas, which were very good, and then as we were about to leave, the hostess pulled out a mic and introduced 2 bachelorettes and 2 people celebrating b-days. She announced that they were going to have a drinking contest and the tables of the winner would get a round of shots. We weren't involved in this craziness, but as our bill came, we got a round of shots also. Melissa didn't want her, so I did 2 of them, but they were watered down, hence the reason they were free.

From there we decided it was time to move on to the party so that we would be there before the B-day girl. It was only a few blocks down the street at a little bar that had been rented out for a few hours. There weren't many people there when we first got there, but gradually people filed in. I saw a bunch of people that I hadn't seen in a while which was nice. Finally, the b-day girl and her family came in and was surprised to see so many of us there to celebrate with her! One of her friends had brought a cool device with them call a "shotski". The party, despite being in NYC and in April, was skiing attire themed. So this shotski was a snow ski with 4 shot glasses attached to it. They were filled up with a Blond Mountain Bomber, in honor of the b-day girl, and 4 people stepped up to take the shot. See the picture below: 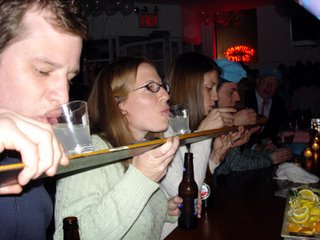 shotski
After we had worn out our welcome at that bar, a few of us decided to stumble over to another bar in the area, this one was called Monkey something. I don't remember a whole lot of what went on after there, but I do know that I woke up on the pullout couch at Peter and Melissa's, so I did make it home. However, I think this is where I lost my camera. I must have been checking out the pictures before falling asleep, because Peter found the camera under the couch when they were putting it away. However, at that point, I was already downtown by Madison Square Garden on the bus waiting to head back to DC. The bus ride was pretty good, I got some reading done and made it back in plenty of time to head off to the Nats game that evening with Al. 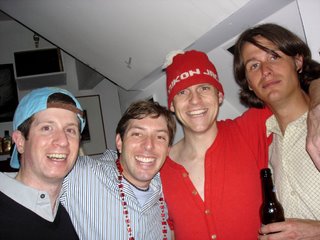 more good friends
It was a good drunken weekend with old friends and reminded me that I need to get up to NYC more often that I have in the past.
Rambling by Tyler at 2:00 PM