I know its a little late, but I just got around to posting in. My All-Star game round-up. 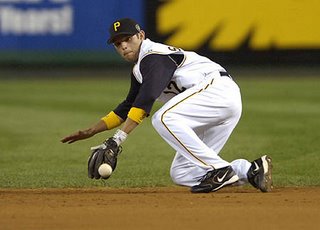 This article talks about how the hometown boys did the other night. I was pretty excited to see Jason get his hit, despite his 2 strikeouts. But he did play for 7 innings! And what can I say about Freddy. He is great! Hit bat might not have been on fire like it has been, but he defense was great. Just look at the picture above! I thought it was great to see all the Pittsburgh stuff that they were showing through out the night. It was also cool to see Chuck Tanner, who I met at Training Camp when he was manager of the Braves, and Phil Garner together on the bench.

And I was happy that Soriano got a hit and a stolen base, even if he was thrown out at the plate. It did make for some excitement. I was disappointed that the NL lost, despite controlling most of the game, but at least it was an exciting finish! And since neither of my NL teams have the possibility of using the home field advantage, it doesn't bother me too much.

And finally, I thought that the tribute that they did for Roberto Clemente was fabulous. It was really touching to see Vera and his sons in the stands. He is truly a Pittsburgh Icon.
Rambling by Tyler at 10:15 AM