HR Derby and the All-Star Game

Did anyone else watch the HR Derby last night from BEAUTIFUL PNC Park? What a thrill it was to watch the balls hit the river!! And all the people in the kayaks jumping in to fight for them. I thought that Wright put on quite a show in the first round, but unfortunately I think he blew it a little too early, and Howard was able to pass him in the finals. I was hoping that Big Papi would get a little further, but oh well, it was an entertaining night. I would have loved to have been there.

And how about those uniforms! I love the black and gold theme, as any native Pittsburgher would!! 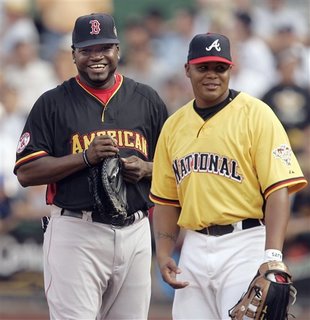 Here is a good article that talks about the Pirate connections in the All-Star game tonight. I am excited to see how Jason Bay does in the clean-up spot. Hopefully this will be the catalyst that he needs to get his percentage up when there are men on base. And how about my boy Freddy! I hope that he is able to get in the game at some point and be the "FredEx"* that he is. I am rooting for a really good game and let's go National League!! Bring the homefield advantage home again.


* There was a fan at Fanfest who had a homemade T-shirt with that written on it. The explanation was that "Freddy always delivers!"
Rambling by Tyler at 4:00 PM