Rocky Gap Triathlon and a Wedding

What a busy weekend I had! The first part of the weekend I had a wedding up in Ligonier, PA and the second half I competed in my 3rd XTERRA off-road triathlon this year, at Rocky Gap State Park in MD. Sounds like a lot, but it was a really great time and the weather was nice also.

My weekend started on Thursday night when I headed out of DC at 7:30 on my way up to Cumberland, MD where I would be spending the night at a nice little retreat called StoneSong. One of the DC Tri Club members is a co-owner of this great little retreat in the hills outside of Cumberland. I spent the night there and then headed over to Rocky Gap State Park in the morning.

I did a nice little ride of the course to remind myself of it before heading off to meet one of the XTERRA Ambassadors to help him mark the course. We rode through it again, stopping to put up the red and blue arrows so that the racers wouldn't have any problems figuring out where to go! We also put up some tape to close off trails that deviated from our course. I even got to do a little off-roading in my allroad as we headed up to the spot where the run course separated from the bike. After most of the course was done, I headed down to the lake to go for a swim before heading off to Ligonier, PA for the wedding festivities!

The drive didn't take me too long, only about an hour and 20 minutes, and I was listening to the Pirates-Nats game on my XM. I got up to Rolling Rock at about 8:00, showered, shaved, and got ready to go to the after-rehearsal party at the bowling alley. I went down to meet my parents and some friends who were having dinner, and I sat with them and had desert, a yummy apple pie. Then it was off to the party. We arrived fashionably late and things were really hopping. I saw a bunch of people that I hadn't seen for a while and even got in a game of bowling. I was probably the most sober, so it wasn't truely a fair game that I won... After midnight, all the old people had gone home except my parents. They are the real troopers. Out came the keg stands and we tried to get mom to do one, but it wasn't Amstel.

The next morning we had the "Run for your Wife" 2 mile fun run and walk. I was going to do the run as a little warm-up for my race on Sunday. There were about 30 of us that ran the course. It was a gradual uphill for a mile and then a gradual downhill back to the line. One guy went out really fast and I knew I wouldn't catch him, so I took it easy and reeled in the other 2 in front of me. I managed to get 2nd place because I crossed the finish line and Tucker, the guy in front of me, missed it. Woo Hoo!! After that we had a nice picnic and then sat at the pool for the afternoon, which was very relaxing.

The weather had cleared up and was beautiful, and a bit hot, for the wedding. It was going to be outside at Rolling Rock, overlooking the hills in the distance. The ceremony was very nice and everyone looked great! Then it was on to the reception! I wasn't going to be able to have as much "fun" as everyone else since I had to drive to MD later, but I still had a good time. I even got out on the dance floor for a bit, sober mind you, and managed to hold my own. After a slow dance with a fellow GW grad, I decided it was time to hit the road so I would be able to function at Rocky Gap!

I arrived back at StoneSong at about 1:15 in the morning to a very quiet house. I snuck in, put a few things in the fridge and tip toed off to bed. I finally dragged myself out of bed at about 7:00, said good morning to everyone, who had gotten to the house on Saturday, Ted, Andrew, Liza, Guy, Laura, and Eduardo. I was worried that I had woken them up when I came in, but I guess I was pretty quiet! After getting some breakfast and some of my things organized, we all headed off to the state park at about 7:45. Once we got there, we ran into Brian, Matt, Heather, and Amy. I headed to check in and get my packet before taking my bike down to transition. I had to go back up and organize all the rest of my stuff, because it was scattered all over the back of my car.

After I got my transition area set-up, we all hung out for a bit, listened to Jim give us a pre-race briefing, and then I took a few warm-up strokes in the water. This year there was a bit of a longer run to the water from the start line. I think they wanted to spread us out a little more before we got into the water. In this small of a race, all the racers start at the same time. 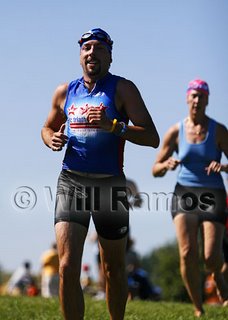 Once everyone was accounted for and in the start area, off we went, running down the beach to the water. I took an inside line that certainly helped my last year. I stayed out of most of the crowd of faster swimmers who would be going past me. I felt pretty comfortable in the water. Much better than last year, and about as good as I did in Richmond. However, I am still a really slow swimmer. I got passed by a lot of people. By the time lap number 2 came around, it had thinned out and I wasn't crowded or run into by anyone. This lap was much smoother, as it was last year, but still slow!! 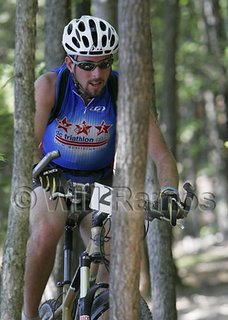 After the second lap I headed off to the transition area to get ready to bike. We had to hand in our swim caps to make sure everyone exited the water, so I didn't pay attention to my time, but as I said, I knew it was slow. And my T1 was pretty slow too. It took me a bit to get my socks and gloves squared away. After the first mile of the bike on the road, just as we were going into the woods, I had my first problem with the bike. Somehow my chain came off the front sprocket. I have no idea why, but it took a bit to get it back on. Then I was frustrated about that, so I wasn't riding all that well on the first section by the lake. I managed to pass a bunch of people, but it was not smooth riding at all! The rest of the loop was pretty good, but still not as smooth as I would have liked. 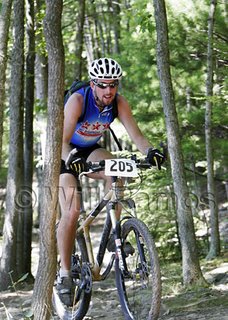 It wasn't until the big rocky downhill on the back section that I started to have some more bike issues. It must have been the jarring decent, but my gears were now skipping a bit and definitely out of alignment. I was able to make it work though, and as I finished the first lap and headed out on my second, I was feeling pretty good. Must have been the Gu that had kicked in. There really wasn't anything eventful on the second lap, other than my gearing still not being right. I was following some people going a good pace though, so that was nice. Right as I was coming into transition, I saw Brian heading out for his run. This transition went pretty well, a bit longer than the girl I entered it with, but I felt good heading out for the run. 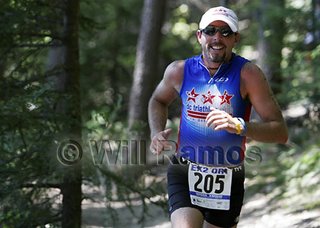 I knew what to expect from this run, having marked the course and having done it last year, but I had a feeling that the way some people were heading out, they weren't as prepared for it. I kept telling myself to take it easy during the first part, so I could turn it on at the end and hopefully get past some people. I passed Brian, with a little difficulty getting around his blocking arms, on the first part of the trail by the lake. Several other people had passed me though. I took it pretty easy and by the time I got to the big uphill and then the dive into the ravine, I was feeling great. This is where I began to make my move. I managed the intense ravine section pretty well and passed several of my age group there. The road section back to the finish was pretty easy and I was slowly gaining on the girl in front of me. As we were coming to the line, I had snuck up on her and had a bit more momentum, so I got her by a few seconds! It was an exciting finish.

The lake certainly felt good after the race. It was pretty hot out there. Not as bad as I was expecting though. Overall I felt pretty good about my race. I beat my time last year by 5 minutes. I was hoping for a bit more, but not to make excuses, I did have a big weekend before even getting to the race... Overall we had a great showing by the DC Tri Club! 4 of us took home some pint glasses, Andrew, Liza, Laura, and Heather! It was a fun weekend and it was great to have a group of DC Tri people out there competing and cheering us on! 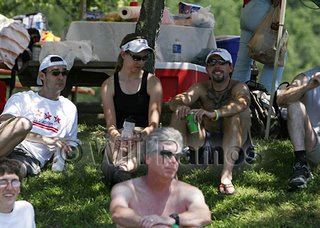 **A special THANKS to Will Ramos for taking tons of photos!!**
Rambling by Tyler at 12:00 PM

Well done on the race! Looks like it was a fun weekend.