After several weeks of a lot of rain and heavy damage to the trails, the 2nd W@W race was able to go off without a hitch. It was finally an nice Wed. afternoon/evening and there was no rain. What we did have though, was a bunch of heat and humidity. It was very hot, but we were still able to have the race. 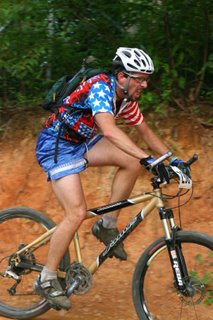 I got to the park pretty early and saw a few people racing in the early race. I watched them take off from the start, then I headed off to do a little warm-up before my race. I was still a little sore from the XTERRA on Sunday, but I figured it would be good to get the legs going again. I was all set with my plan for the start of the race, hoping to do a bit better than the last time we raced, about 3 weeks before.

As all of us Sport Men lined up at the start, I was going to take and outside line and cruise on up the hill. Unfortunately, one of the guys in front of me crashed as we were started up the hill and slowed a few of us down that were right behind him. I was able to still get a pretty good start up the hill. Then I settled it in and didn't let a whole lot of people pass me, but I didn't pass all that many myself. I was in pretty good position. 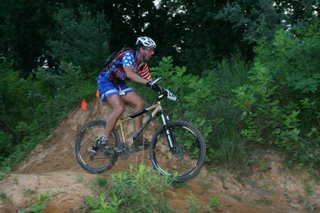 I decided that I didn't want to burn myself out on the first two laps, plus I knew that it was hot and humid, so I continued to plod away, keeping my position. I let the really fast people by me, but I held my own against the ones that I was racing. On the third lap, I knew that I had enough energy, so I picked up the pace a bit and I was able to keep anyone from going around me. I was really excited to make it to a third lap, unlike the last race where I had a flat at the beginning of that lap. I came home in 20th place, just a few seconds out of 19th. I couldn't push it hard enough the last section to pass the guy in front of me. 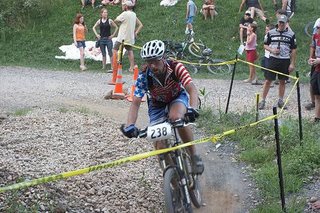 It was a good race, up until the time I decided to take off. I stupidly put my helmet on top of my car as I was getting ready to leave, and didn't see it there as I was taking off. On one of the corners, it went flying off. I turned around and went to get it, but as I was almost back to it, a car ran over it and it flew back right at me. It was cracked and broken in a few places. The first week it was the tire, this week it was the helmet, hopefully nothing will happen at the next 2 races!!!
Rambling by Tyler at 1:15 AM

T, that sounds like the time we went Mtn biking and I left my hat on top of your car, and it stayed on your roof the whole 30 miles back to Arlington!

wkOUCH!!! The flat tire is one thing but a helmet is a complete other one. Sorry to hear it bro. I hope to see you on the trails soon. Give me a holla if you want to get some trail running time in.