The Exam and Aftermath

Well, the exam is over. It has been a week since I took it. I am not really feeling any better about it after sitting on it for a week either. I had a pretty good morning. I felt like I had prepared well and had was able to answer most of the questions in the first general Civil section. I headed out of the room to grab a bite to eat feeling good. Then we filed into the room for the afternoon session where I was going to take the Water Resources section. I compared it to the Environmental section and determined that the WR one was a bit more familiar. However, after spending the first 30 minutes and not getting an answer, I was feeling a bit rejected. This feeling continued through out the afternoon. I had to serious guess on a number of questions and that did not make me happy. I hope that all my studying paid off. We will see in 8 to 10 weeks...

After I took the exam, I was off for a weekend of trouble to Vegas! A Buffett concert, a bunch of drinking, and a show were on tap. Not much gambling for me, but I am always up for watching. Last year I won about 10 bucks in the slots. But this year was not the same. I lost 3!!! Terrible! It was a fabulous weekend though! The Buffett show was great, the Beatles themed Cirque du Soleil show was fabulous, and I definitely had a good time drinking margaritas and such! We sat by the pool each day for a bit which was very relaxing. Another successful trip to Vegas!! 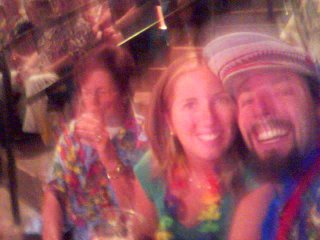 After taking the red-eye back on Monday night, I have had several really busy days with work, making up for the time that I took off before and after the exam. On Wednesday I had tickets to see A Midsummer Nights Dream at the Folger Theater on Capitol Hill. I thought it was a very well done show and very entertaining.

This weekend I am headed back up to Pittsburgh to get my dogs back from their vacation while I was studying hard. It is going to take a little readjustment to walking them again! While at home I am going to the Steelers game against the Broncos. Hopefully I can enhance my 1-0 record watching them in person to 2-0. What a fine line this season has been. It's the little inconsistencies that have been killing them. Oh well, I am still riding high from the XL win!
Rambling by Tyler at 3:30 PM