In my opinion, this wasn't as good a Superbowl as last year, but that may have had something to do with the fact that the Steelers weren't in the game. I was really just looking to see a good game and despite the rain making it a bit of a sloppy one, I think it turned out to be exciting. At least until the 4th quarter when the Colts really walked away from the Bears. I was very happy for Peyton and it was kind of fitting that he won. Considering that he took my fantasy team, The Land Sharks, to the Fantasy Blogbowl and won it all there!! 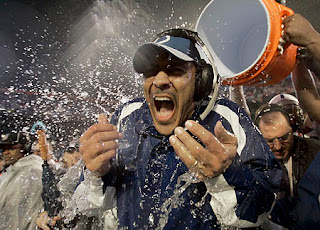 However, I was even happier for Tony Dungy. He was a former Steeler both as a player and as a coach. Not only that, but he is now only 1 of only 2 men to have played in and won a Superbowl game and been the head coach of a Superbowl Champion. Taking into account what he went through last year with his family and being such a stand-up guy off and on the field, I was thrilled to see him win the Superbowl last night.
Rambling by Tyler at 12:15 PM