It's Playoff time in the Steel City!!

For the first time since 2001, the Penguins will play a very meaningful Post-Season game tonight in Ottawa!! Here is an ESPN article about the game.

The Pens were edged out of that 4th seeding and home-ice by having fewer victories than Ottawa, since both teams finished with the same number of points. I can already feel that this is going to be a great series. The history that Ottawa has in the playoffs and the youth of the Pens will be huge factors in that! I am so excited... It's about time that we have some playoff hockey back in the burgh. This on top of the great seasons that Crosby, Malkin, and Staal had.

Several weeks ago, my parents and sister got to meet one of the men who is partly responsible for the quick turn around that the Pens had between last year and this year, Ray Shero. He is an alum of the school that my sister went to, so they had an event at a Pens game, and he came up to talk to them for a while. I was very jealous to be stuck in DC that weekend.... 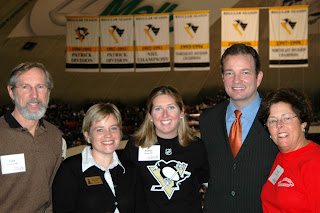