After my trip down to the New River Gorge last year for the 6th Annual ACE Xterra, I decided that I would tackle the course again in their 7th year! I was out with vengeance this time because I feel like the course bit me in the ass last year. This trip was going to be a bit different. There were 3 of us from the DC Tri Club that were racing, so I wasn't headed down alone. I carpooled down with Andy, who very nicely drove the whole way, while Andrew and his wife came down later. Andy and I made it there at about 3:30 and headed to registration. We found out that the race would be a bit smaller this year, with about 60 people registered. I decided to camp at ACE again because it is free for racers and Andy was in agreement. However, the spot that I camped in last year had already been claimed, so we had to find a spot down the mountain near the main ACE buildings and the lake.

We set up camp and got things situated there before heading down towards the lake to see what was happening. I ran into a bunch of people that I knew from last year and other races. We chatted for a while until we were sufficiently hungry enough that we went off to search for the racer's pasta dinner. Last year it was outside of the dinning hall and wasn't the greatest organization. This year it didn't seem too organized either, but it was inside the dinning hall and we weren't technically allowed all you can eat, but it was also free! Can't argue with that!! After dinner a bunch of us, including the cool Xterra reps, hung out near the lake and watched all the kids play on the lake toys. Once it got dark we went to the bar to have a beer to help us sleep. Then it was off to the tents to get some rest before the race! 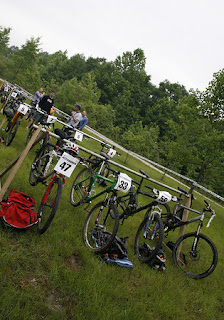 The one downfall to where we put our tents was that the light outside the shower house was shining right towards the tent. This wasn't too bad though, because I fell asleep pretty easily and it didn't bother me. I got up in the morning, packed up my transition bag, got the bike loaded on the car, and off we went up to the transition area. I had a few bites to eat, a banana, a muffin, a cereal bar, and some Gatorade. Then I got things organized, put my bike in transition, and listened to the pre-race brief. Once I made sure that my transition area was all ready, I got in line to board the bus to head to the swim start.

Once the buses were all loaded up with racers, spectators, and volunteers, we headed all the way to the bottom of the gorge to the New River for the swim section. The trip down was a nice reminder of the elevation that we would be gaining on the run back up to the top!! We stopped at the swim take-out to drop off our lower transition gear: running shoes, hat, Gu, race number, etc. Back on the bus we headed the 1.5 miles up-river to the start of the swim. We all gathered at the edge of the water getting goggles and swim caps on. The safety duckies and kayaks were getting in place, everyone started to wade out in the river, and off we went! 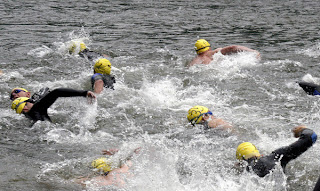 With the small number of participants, the start was good. I jumped on in the water and made my way out to where the current was running. I didn't really get kicked or pulled or feel like I was cramped. As soon as you get moving down river, you cross under a high bridge and go through a little ripple. We were still in a fairly big group at this point, but I felt good on my way down the river. It took me a little bit to get comfortable and breathe every 3 strokes, but I was doing well. The water was warm enough that I didn't need the wet suit vest that I was wearing, but it helped keep my jersey from slowing me down! Plus the little bit of buoyancy was a nice boost. The swim felt pretty long, but I was actually 4 minutes faster than last year and I felt so much better! I finished in 32nd place in the swim with a time of 28:03.

I hopped out of the water feeling good, not really knowing where I stood in the field, but not too worried about that. I had a fairly slow transition, but that didn't bother me. I took a Gu, had some water, and off I went. There were a few people in my sights ahead and I could hear one behind me. The first part of the run is a nice and flat trail that runs along the river on an old railroad track bed. I was feeling good, making up some time on the girl in front of me. We ran over a wooden bridge where the photographer was positioned and then we got to the big scramble/hiking hill. Last year I was not prepared for this at all, but I knew what was in store and cruised right on up. It helped that it wasn't as wet as it was last year also! I hit the fire road, chatted with the girl in front of me briefly, then took off towards Aid # 1. Shortly after I started running again, another girl went around me. She seemed to be cruising at a nice pace, so I decided to stick with her. 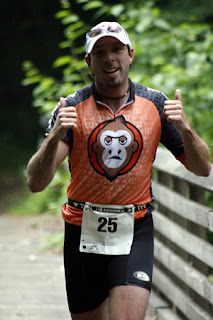 We hit the first Aid stop and about that time, my ankle was beginning to hurt. I couldn't figure out why because I haven't had any problems there before. Deja vu struck and eventually I remembered that I banged a rock in the swim (just like last year)... but by that point, the pain had moved up to my knee. It kept getting worse and worse. All I could think about was that the Aleve I took that morning was not working!! Fortunately I was pacing the girl in front of me and I would not let myself drop off, or else I was worried I might not finish. A big motivator for me was the song "Move Along" by the All-American Rejects. I slowly dropped back from my pacer as we were finishing the run, but there was another guy just around each corner that I could see. I popped out of the woods to a big crowed cheering me into transition. I was so happy to be able to get on the bike and off of my legs. I finished the run in 32nd place in a time of 1:26:39.

My transition to the bike went pretty well. I was going to have a Gu, but I was concentrated on getting back on course, that I forgot it sitting right next to my shoes. I took off right behind the girl who I had paced on the run and I was excited to be getting to my strength where I could hopefully make up some time! I have been having issues with the adjustment of my bike and I was hoping I wouldn't have any problems during the race. The first couple of hills, I was not feeling very comfortable. I got a bad sense... the bike portion was supposed to be my strength! I decided to just take it easy, stay focused, and ride my own ride. That helped, but I still felt that my bike was acting up a little. I knew the course from the year before, so I was not worried about that, but I had forgotten about a sharp switchback, not far into the trail. I tried to stop and walk it down that section, but it was too late and I fell, bruising my thigh. Still not off to a good bike section. 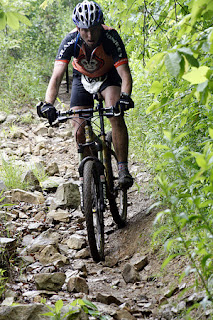 I continued to take it slowly knowing that no one was right behind me. I got to a point where I needed to get off the bike and I felt my left leg cramp up. That's when I realized I had forgotten to eat the Gu! I stopped just ahead at a gate that I needed to go around, took a Gu, and let 2 guys go ahead of me. I started feeling better right away and tried to keep pace, but they were much faster, and I lost sight of them quickly. The big downhill, Rigamortis, was coming up and I was finally feeling ready for it. I cruised down most of the hill, walked a bit because I didn't want to fall again, and passed a guy right after I got down to the fire road at the bottom. I was definitely feeling comfortable after that. I decided to just take it slowly but surely and just finish the race. From there on out it was fairly lonely, as I didn't see any other racers for the second half of the trail. I didn't have any bonking issues this year and I came in 33rd with a time of 1:23:25.

Overall I was pleased with my results at the 7th Annual ACE Xterra. I felt a lot better at the finish line and I came in 29th out of 58 participants that finished with a time of 3:18:07. I was the mid-point of the race, which was a 15% increase over my finishing position last year. It was a fun weekend with a bunch of cool Xterra racers and staff. I really like the small grassroots feel of this race and I plan on racing it as much as possible.

**Both Andy and Andrew had great finishes, much better than mine!!
Rambling by Tyler at 2:15 PM

Too bad you live in Virginia, I need someone to go mountain biking with. Congrats on the Tri!

Thank you! If I ever make it out your way you'll have to show me some good rides. And vice versa!