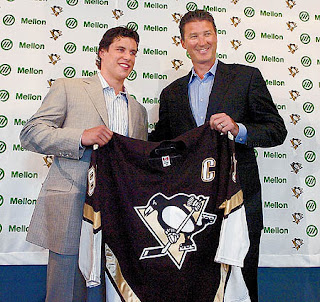 It was announced yesterday that Sidney Crosby has accepted the position of Captain of the Penguins. Ever since Mario re-retired they have only had Assistant Captains. Sid was asked during the season if he would accept the position, but he said that he wanted some time to think about it. I think this is an excellent decision and I hope that he will be the Captain for years to come!!

apparently you bleed BLACK AND GOLD!

apparently you are observant!