Moving toward Green... A Metro Experiment

I have been doing a bunch of reading about Climate Change and environmental issues that we are facing in the world today, and I decided that I needed to evaluate some of the little things that I do that can help. The first thing that I have started to work on was re-using as much stuff as I can.

Recently the issue of bottled water/drinks was brought up to me. One blog that I read regularly, The Green Miles, had a post about this the other day. I try to always carry my own water bottle with me and fill it up where I can. Reading that post made me conscious that I need to do it even more.

There are plenty of other things that I have identified that I can do to help make a difference. But those aren't nearly as "interesting" as what I decided to try yesterday with the Metro. One big thing that I do is I tend to drive a lot of places. So last week I decided that I would try to make a concerted effort to take public transportation when it made sense. As opposed to when I normally take it, ie. after a night out of drinking... So this is where the metro comes in. 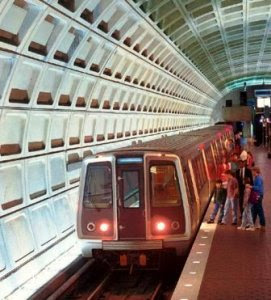 I work out at Andrews AFB and I knew that the metro went close to there, but I wasn't exactly sure how far away it was. So after a little research I found out that the stop was only 1.5 miles from the front gate to the base. And there is even a bus that runs from the stop to the gate. However, the main problem that I ran into is that my office is pretty far from the main gate. It is about 3.5 miles away and there is no shuttle bus or anything that would take me closer. So I got to thinking...

I used to ride my bike to work when I was in the city, so why couldn't I take the metro and then ride my bike from there to my office. That seemed like a good plan, so I decided that I would try it. Well, at rush hour, you can't take a bike on the train, there are waaaay too many people. So my next thought was that I could leave my bike locked up at the metro stop overnight and pick it up in the morning. So I brought my bike to work and dropped it off on my way home. I just hoped that all of it would be there the next morning!!

I jumped on the bus in the morning, transferred to the metro, and got off at my final stop. When I walked out of the metro, there was my bike just as I had left it! I got all situated for the ride and then off I went to the gate. The bus that runs there has a bike carrier on the front, but it was still 10 minutes away, so I decided to ride the whole thing. It was fairly painless, but I would have been better off with a different bike. Since I was concerned about it being locked up, I took my 10 year old mountain bike, with only 3 working gears. It was a little more work than I thought it would be, but I made it to the office successfully.

There are a few downsides to my trip that made me think this would not be a good every day option. First, it took me about 1:15 one way, which then eats up a full 2 1/2 hours each day. I did get some reading done on the metro and I did get some exercise though... Second, on my trip home on the metro, I was a little hot and sweaty from my bike ride. All in all though, it was a successful experiment and something that I may be willing to do more of. Hey I tried it again today also!! I am even contemplating getting a bike locker at the metro stop so that I don't have to worry about the bike and I can ride a nicer one.
Rambling by Tyler at 7:50 AM

Way to go! Most people never even explore their Metro options, so you're already doing more than most. I know what you mean about the added time, my trip from Ballston to Reston is the same way, twice as long by Metro, so I only Metro one or two days a week. And I'm with you on the heat, too, I've been slacking on Metroing through this endless stretch of 90 degree days, but the trip will be much more enjoyable once it cools off a bit.

That is awesome! When I first moved here from Minnesota I tried a similar experiment, except I did not own a car and I used public transportation for everything. I soon found out if you want to be a triathlete living in Northern Virginia you need to own a car.

Good for you T! Another option is to run part of that leg. I commute 10 miles each way by foot or by pedal. It takes a little more forethought, however. For example, today I brought in all my food and clothes I need for the next 2 days so that I can run to and from work without carrying anything besides my keys and my cell phone. Little things like that add up, and pretty soon, you've made a substantial reduction in your carbon footprint. And it piggybacks as part of your training routine, so in the end, you're saving time. Great job!