Kristi and I took a little trip up to the annoying city of Baltimore last Sunday to watch the Steelers take on the Cleveland Browns V.2 in an AFC North showdown. After beating them in the 'burgh, this game was for the North title and a bye-week for the playoffs. So I guess I don't have to mention that it is the biggest game we have played in Baltimore in a while. 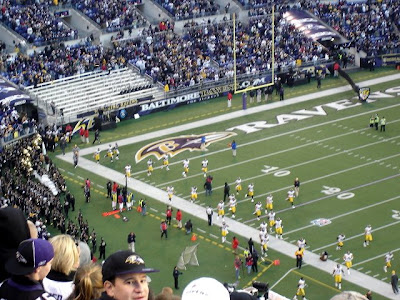 Here come the Steelers!!
After not having won in Baltimore since 2002, we were a bit worried on our way up into enemy territory. Baltimore does not have a reputation for the best fans in the NFL. The last time that I went to a game up there, I was harassed the entire game and then we saw a fight that ended in a broken car window on our way out of town. This time I decided that we would try parking outside the city and taking in the Light Rail. We got on the train, that was filled with opposing fans, but surprisingly, they were fairly civil. We got to the stadium, and no one really paid us any attention. A few passing comments, but nothing that I wouldn't expect from some smack talking.

I am sure a fair amount of those reading this know what happened in the game, so I won't detail that, except to say that it was the defensive battle that we all thought it would be! There were a number of frustrations with some dropped balls by the Steelers receivers, but when it really mattered, my boy Hines made some big catches. This article really shows why I wear his jersey. Nate and Tone also made up for some of their struggles earlier to help the Steelers move down and get the W!! 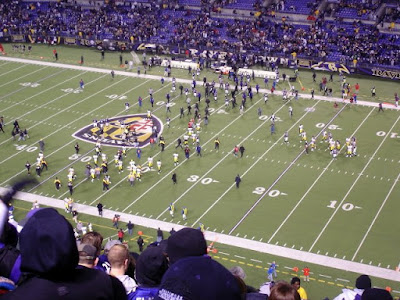 Kristi has been to Baltimore each year since she moved here and has not seen them win, so she was doubly excited! Here we are after the game ended:

Check out the Stunned guy behind us!!

Congrat's to the AFC North Champs!

Now it is on to Tennessee to take down the Titans...
Rambling by Tyler at 11:00 AM