In my last post, I wrote about not being sure about going to Game 5. Well, we all know how that went down. I intended this post to be a celebration of the fact that I saw the Pens win Game 5 and then take Game 6 on their path to the Eastern Conference Finals. Again, we all know how that turned out. So all I have to say now, is What an f-ing amazing series this has turned out to be!!!! There has already been so many words written about the fabulous display of hockey that we have been privileged to watch, so I will just say, Wow! I picked the Penguins to win the series in 7 games, but I did not expect it to be quite this amazing.
Now, on to the original purpose, Game 5... 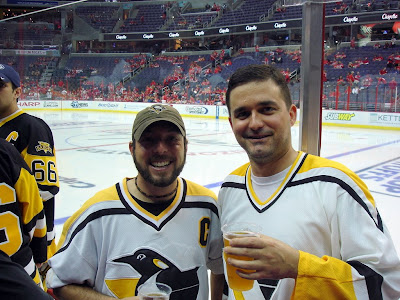 My friend's Jen and Marcy were very nice to sell their tickets to me, since they had prior obligations, and I invited Brad to come with me, a fellow Penguins and Steelers fan!! We met at RFD for a drink before the game, with tons of Caps fans and a fee hearty Pens fans. I had wanted to go in to the phone booth early so that I could catch the players come out of the tunnel for the pre-game skate. Here is a really short video that I shot:

After they all came out onto the ice, there was a good crowd of us Pens fans hanging around watching them skate around before they started to stretch. We chanted a bunch of Let's Go Pens, and the guys seemed to be pretty psyched about that. Then they started doing shooting some pucks and getting warm. 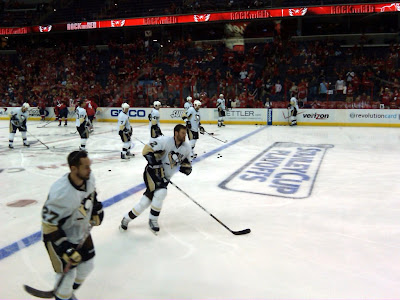 While they were taking turns, a few of them came over to the boards where we were and tried to flip a puck or two over the boards to us. While Satan, I believe, was trying to flip one to a girl in front of me, one of the equipment managers on the bench tossed one from my left. I saw it hit the ground and roll to my feet, so I picked it up and put it right in my pocket! Unfortunately it does not say "playoffs" on it, just a really worn out NHL logo. The skate ended soon, and then it was time for all of us "400 levelers" to leave the good seats and get ready for some playoff action!! About this time my camera died, but here are a few more pics that I was able to take: 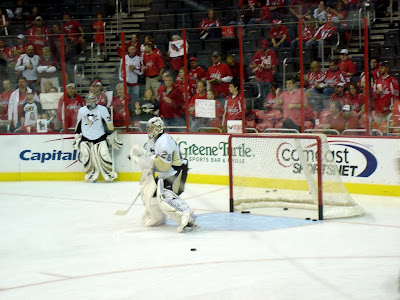 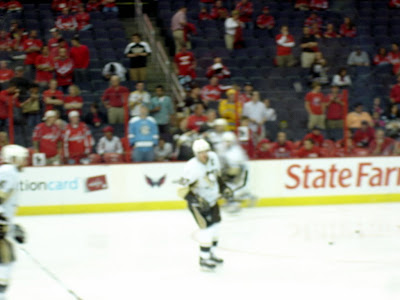 And of course, as the Pensblog likes to do in their game re-caps, here is an anthem pic: 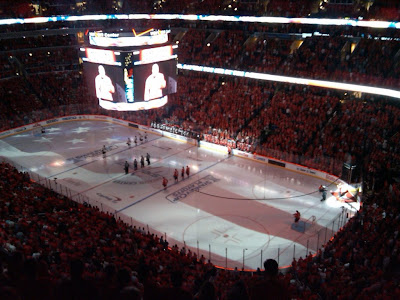 I am not going to go into the game, the fact that we won while I was there for the first time all season, or the let down of losing Game 6 at home, with a fluky broken stick.... Instead, I am going to think about all the times that we have beaten the Caps in the playoffs and look forward to watching that happen again (from home) on Wednesday night!