Last week, my parents took Max and Chloe with them when they went home to Pittsburgh.  Max had just been diagnosed with an ACL tear in his knee.  When they left, we had decided that surgery was going to be the best option for him.  There were several Veterinary Specialists that were were looking at to have the procedure done.  Two of them were in DC and one was up in Pittsburgh.  Without knowing exactly what the recovery would be like and how mobile Max would be, we decided that it was worth having the vet in Pittsburgh take a look and give their recommendation. 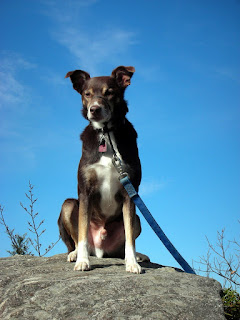 Max was able to get an appointment for last Thursday, and after discussions while scheduling it, the vet said to prepare for going through with the surgery that afternoon if we felt comfortable with the diagnosis.  I made sure to block time out of my schedule at work so that my parents could call me while they were getting the recommendation.  My vet in DC said that most likely a specialist would  recommend that Max have ligament replacement surgery, but the specialist in Pittsburgh made a very compelling case for TPLO surgery.  Despite not looking into this type of surgery beforehand, her comments while I was on the phone made me realize that this would be te best way to go for Max. 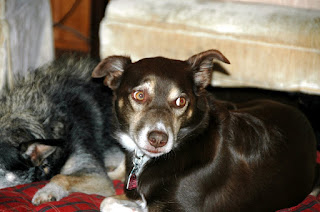 Unfortunately it would also be a lot more invasive and call for a longer and tougher recovery.  But if it would make him good as new, I was willing to go for it!  The procedure would involve a large insicion in his leg to allow for the cutting of his tibia bone.  This would allow his knee to function without a ligament holding it together, but would require a plate to be installed to hold the bone in place.  While Max was being put under anesthesia, we decided to have a lump on his stomach removed and his teeth cleaned, so it was quite a trip to the vet for him!!
﻿﻿﻿﻿﻿﻿ ﻿﻿﻿﻿﻿﻿I got the call Thursday evening that the surgery went very well and he would be on his way to recovery soon!  The past 4 days he has been recuperating with my parents, but they are bring him back to DC this evening and I get to see my stellar patient!  I know it is not going to be easy, but I just have to keep the end goal in mind, Max being able to run and play with Chloe!  And don't worry, I'll keep everyone updated on his progress.
Here are a couple of pictures of him and his knee.  He has lots of staples in his leg!
Lying on his bed after surgery
Staples in his knee
Knee up close
Rambling by Tyler at 1:00 PM

Email ThisBlogThis!Share to TwitterShare to FacebookShare to Pinterest
Labels: Me, Pups

Ahh, poor Maxie. He looks like he's doing well in the after pictures. Those staple are unreal! He's a strong doggie though and he'll be back on his feet in no time! Keep up the good work Max!

poor max!! he'll be able to stay calm enough during recovery to not mess with those staples?

Max's cousins are thinking of him and sending lots of hugs and kisses his way!! XOXO

He is doing much better tonight than when those pics were taken!! I think that the pain meds are still keeping him a little bit out of it...

Thanks girls, I passed along your hugs and kisses.

Newlyweds on a Budget said...

Thankful to read the comments that his recovery is going well! I'm glad that you spoke with the vet in Pittsburgh! Licks and wags to sweet Max