My Bicycling to Work

Since my last post about the 2009 bike to work day, I have been doing a lot of biking to work!  It really picked up in the spring of 2010 when I was training for a big bike ride in June.  Then, I changed job locations, closer to home, so the time that I would be commuting decreased.  (I also lost the big hills that were helping my training...)  I am now based at the Navy Yard in Southeast DC, which is about a 30 minute, 9 mile ride from my house.  Enough to get a little bit of a workout, but not as much as I was getting. 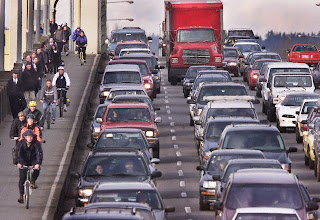 If you have been paying any attention to the weather this year, you will know that it was a hot summer in DC.  However, I did not let that stop me from riding to work!  Fortunately, there is a gym at work that I can shower and change clothes in, so the heat didn't really affect me too much.  Over the summer, I rode to work 45% of the time.  This was low because of various ativities going on suring that summer where I needed to drive.  However, toward the end of August, I decided that I would ramp things up, and see how many consecutive work days that I could ride.
Starting on August 25th, I have ridden to work every day, which brings the current total to 23 days, including my ride in this morning.  About halfway through the month of Septemeber, I decided that a way to keep my streak going, I would have a goal of riding every work day of the month.  As the month was coming to an end, I was worried that I may not be able to complete my goal!  September was a pretty dry month, so I had great riding weather, but that all changed during the last week of the month when a ton of moisture from the tropics cruised up the east coast, passing right over DC.  After monitoring the weather, the only day that I was worried about was September 30th, the last day of the month!!
After coming this far, I knew that I could not give up my goal easily.  It wasn't a hurricane that was over DC, it was just a lot of rain, with some sporatic flooding.  There weren't any crazy winds, so I braved the weather and accomplished my goal by riding all 18 days that I worked in the month of September.
I want to give a little bit of credit to my persistent riding to my friend Emily, who has been writing a blog about being car free, Going by Bike.  Check it out!

Email ThisBlogThis!Share to TwitterShare to FacebookShare to Pinterest
Labels: Green Issues, Me

Happy that you're blogging again! Also very impressed that you've biked to work so much in the past 6 weeks! xoxo

I am fairly impressed with myself as well!! On both counts.

Hope you are doing well.

Thanks for the shout-out! And awesome that you're riding to work so much! Let me know if you want to do a 'guest' blog