As I mentioned in my last post, I had a feeling that there could be a lot to talk about with a new Administration taking over. Little did I know that so many controversial things would happen in the first 5 days of the Presidency! I am not going to touch on all of those items, instead I am going to touch on what I decided to do to show my disapproval for many of the stances that the new President has taken.


#WhyIMarch - In honor of all of the women in my life that I love, I decided to show my support for them by joining the hundreds of thousands of men, women, and children in the march on DC. I did this to stand up for human rights and against the hateful rhetoric that has emanated from the President during his campaign. It was very inspiring and humbling to be a part of a global movement to stand up for what many people believe in. The one chant that really made me think about how lucky we are to live in this country was "This is what Democracy looks like!"

I knew that there were going to be a ton of people that I knew headed down there, so I figured that I would be able to meet up with many of them at some point. Since I knew that public transportation would be a disaster, I decided to ride my bike down. My friend Sanna had the same idea, so we made a plan to meet up near the bicycle check-in, which ended up being right outside my new office building!

I didn't make it down there until after the official start of the rally and really didn't know what to expect. I was shocked when it was really tough for me to get to the bike parking because of all the people there. And the check-in was 7 blocks away from the stage! At this point, I began to get a little concerned that I wouldn't be able to find anyone that I knew. To add to that, the cell service was super spotty.

Fortunately I found Sanna and her friend who were perched on a concrete wall with a good view of the intersection of Independence and L'Enfant. There was a screen that we could see most of and speakers nearby to that we could hear what was happening on the stage. We decided to stay there for a while and just watch everything going on around us. It was quite the sight to see! 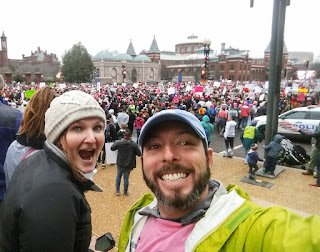 We became a little chilled from staying in one spot and since it was after the official start time of the marching, we decided to start moving around. Plus, the crowd was starting to get a little restless to start walking as well. We tried to move toward the march route, but it was still so packed, that it was really slow going! 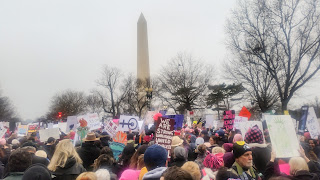 Eventually we were able to break free and we made our way towards the Washington Monument and the White House. This is when we really got a good sense of how many people there were, it was amazing! We headed towards to ellipse to really show the new President how we felt and then decided to circumnavigate the White House.

We had to get back to our bikes at the check-in, so we thought we would head back by way of the Old Post Office building to see what was going on there. Everywhere we walked in the downtown area the marchers owned the roads!

We made it back to pick up our bikes and I headed back to Arlington with a new sense of purpose. I cannot sit idly by and watch human rights being taken away from people who deserve better from our Government. Not to mention all of the potential environmental and nature impacts that are sure to occur due to this Administration. I have already started calling my Senators to express my opinions and I hope that many of you will do the same!!

This may be a long four years ahead of us, but we must keep the fight on for the issues in which we truly believe!
Rambling by Tyler at 9:53 PM

Email ThisBlogThis!Share to TwitterShare to FacebookShare to Pinterest
Labels: Politics